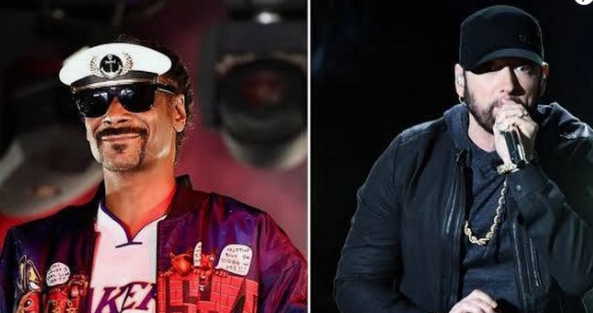 Popular American rapper Snoop Dog has spoken out about his recent rivalry with his former record lebal mate Marshall Matters aka Eminem.
He called the feud between the pair “family business”.

Last week, Snoop said Eminem and him were good, surprising fans who believed the rappers to be arguing after both criticising each other in 2020.

Snoop who appeared on Watch What Happens live with Andy Cohen on Sunday January 17, 2021 set the record straight and confirmed that they were “still friends”.

Speaking about the alleged feud, he said: “I think that’s family business and I don’t want to make it more than what it is.”

You may recall that a disagreement came after Snoop said in an interview in July that he did not think Eminem was one of the top ten rappers and that the rapper’s success was largely due to Dr Dre.

In response, Eminem took a jab at Snoop in a track “Zeus” which was released in December, 2020.

In the song Eminem rap thus “As far as squashing beef I‘m used to people knocking me / But just not in my camp / And diplomatic as I’m tryin’ to be last thing I need is Snoop doggin’ me”.

Eminem then suggested he was disappointed with Snoop’s comments, rapping: “Man, Dogg, you was like a damn god to me / Man not really, I had dog backwards.”

Meanwhile, addressing the lyrics on WWHL, Snoop continued: “He said what he said [on “Zeus”], I respect that. We just going to keep it right there. It’s family business.”