The Federal Government and the Switzerland government have inaugurated a Blue Bus Project in commemoration of the countries 10th anniversary in migration partnership to control irregular migration in the country.

Hajiya Sadiya Umar Farouq at the inaugural ceremony on Tuesday in Abuja expressed pleasure on the uniqueness of the decade-long exemplary relationship between Nigeria and Switzerland on migration.

Farouq said that it was a celebration of success, stressing that there was no time in the history of international relationship that the management of migration across international borders had been easy or free from numerous and diverse challenges.

She explained that the situation was even worse with the alarming increase in the volume, complexity and threat in international migration.

“Nevertheless, in spite of the difficulties in logistics and politics, empirical record shows that with right policies and partnerships, migration can always bring about positive economic and development impact to both the destination and origin countries as well as migrants themselves.

“In all of this, the Nigeria/Switzerland bilateral partnership is outstanding and enjoys a unique kind of strategic relationship based on mutual trust and respect for each other.

“The partnership has over the years expanded to provide a number of laudable projects targeted towards better management of migration in Nigeria and mainstreaming migration into development.

“We look forward to a stronger partnership ahead in order to consolidate the successes so far made,” Farouq said.

The News Agency of Nigeria (NAN) reports that Farouq was represented at the event by the Permanent Secretary of the Ministry, Alhaji Bashir Alkali.

Speaking, Ms Karin Keller-Sutter, the Federal Councilor and Head of the Federal Department of Justice and Police, Switzerland, said she was pleased with the 10th anniversary celebration.

Keller-Sutter said the migration partnership between Nigeria and her country was an ideal example of how bilateral relations could be use to address common challenges in a positive and dynamic way.

She maintained that Switzerland was determined to continue to Foster the dialogue within the framework of the migration partnership and remained a close partner to Nigeria and Nigerians.

“I praise the resilience of the Nigerian people. Our relationship has become a corner stone of trade and other profitable ventures.

” I am also impressed by the ongoing projects to support Migrants and Internally Displaced Persons and I would be able to see some of the projects as we inaugurate the Blue Bus Project today.

“The Blue Bus Project is a good source of counselling and enlightenment on the dangers of illegal and irregular migration to people in all parts of the country. And this would help to control the surge,” Keller-Sutter said.

Also, Ms Prestage Murima, who represented the International Organisation for Migration (IOM) under the UN in Nigeria commended the efforts of both countries in tackling migration using evidence base strategy.

“Since 2001, IOM has been supporting the Nigerian Government on migration through technical assistance, capacity building, relief materials and many others.

“The UN is committed to fighting against illegal migration and trafficking in persons. As a partner we shall continue to provide capacity building to Ministries, Departments, Agencies and supports returnees.

“The Blue Bus Project is a one stop shop for enlightenment and information sharing about migration and dangers of illegal migration,” Murima said.

Also speaking, Mr Gabriel Aduda, the Permanent Secretary in the Ministry of Foreign Affairs, said the migration partnership agreement between Nigeria and Switzerland was signed on Feb. 14, 2011.

Aduda said the agreement was to partner against smuggling of illicit drugs, migration, promotion of border control, reintegration of returnees and migrants, adding that both countries are on track.

Imaan Sulaiman,  Director-General of National Agency for the Prohibition of trafficking in Person (NAPTIP) said the Agency had benefited from the relationship in terms of capacity building and relief for returnees.

She said the Green Bus Campaign would help in taking messages on migration to the grassroots.

“In the Green Bus, there is a provision for counselling, education and other services to ensure that the mentality of wanting to illegally migrate to other countries by Nigerians is addressed’.

Sulaiman was represented by Mr Godwin Mouka, a senior officer from the Agency.

Marwa restated the commitment of NDLEA to checkmate the activities of drug peddlers and destroy their cartels, adding, “winning drug war is not negotiable”. 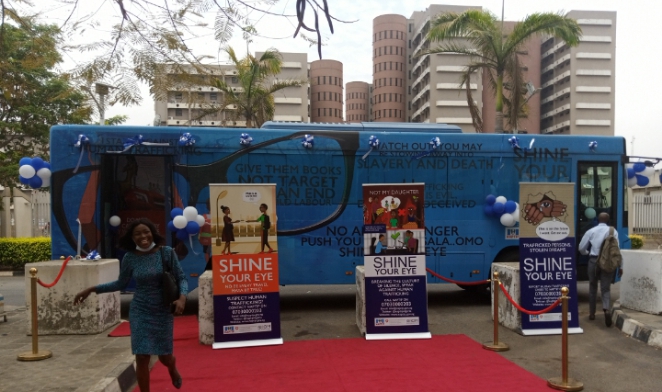 NAN reports that high point of the event was the inauguration of the Blue Bus with three compartments for counselling and information sharing. (NAN)