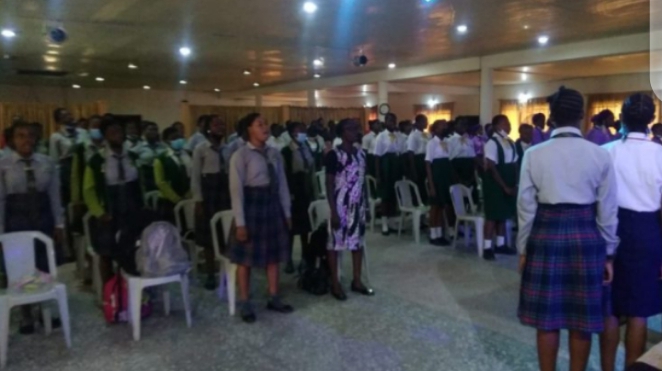 An NGO, Centre for Children’s, Education,Health  Orientation and Protection (CEE-HOPE), on Wednesday urged the Girl Child not be  be left behind  educationally and digitally.

The NGO’s Executive Director, Mr Betty Abah, made the call in Lagos, at an event  to mark the 2021  International Day of the Girl-Child.

The theme for  2021 International Day of the Girl-Child is “Digital Generation, Our Generation”.

The International Day of the Girl Child is marked globally on every Oct. 11,  with the aim of empowering, sensitising and promoting girls’ rights and equality with their male counterparts.

“This programme, is in line with the International Day Of The Girl Child, which is aimed at reminding the world that Nigerian girl child and every other girl child around the globe matters.

“The girl child is an endangered specie that required a special care unlike other person, gender or age grade.

“The girl child is like an egg that, can easily be damaged through sexual abuse, teenage pregnancy and all sorts of abuses and that is why we are creating awareness for the need for their safety”, she said.

According to her, most girls do not major in science or engineering studies due to stereotypes, cultural beliefs and sentiments that they will not do well in such professions.

Abah, who  enjoined parents to always allow their daughters to major in their choices  of studies, urged girls not to allow themselves to  be discouraged.

“A girl’s brain is not  different from the boy’s”

“Parents should invest in their children’s education, especially the girl children. Women  like Ngozi Okonjo Iweala, Dr Obi Ezekwesili became who they are today because their parents invested in their education.

“The most important thing for you is to dream. Where there’s a will, there will always be a way.

“Also, you have to discipline yourself because people fall by the wayside into child prostitution and because of excuses. But when you believe in yourself, work hard and pray had, you are going to make it, ” she said.

Another speaker at the event, Adefunke Treasure, a former Assistant Director of Programmes at  Federal Radio  Corporation of Nigeria(FRCN) ,  disclosed that many girls were dropping from school.

Treasure said that efforts should be made to encourage  more girls to return to schools to make significant impact in the nation.

“It breaks my heart every time I hear about girls being out of school because they are being denied their fundamental human rights.

“The statistics from UNICEF  that about  1.3 million Nigerian girls are dropping out of school every year, due to one reason or the other is alarming.

“So, those of you that are still in school should count yourself lucky.  Many girls are wishing to be a part of programmes such as this, but didn’t have the opportunity.

“Therefore, I want you to take your education seriously and protect yourselves from anyone who tries to take advantage of you in any way.

“I also want you to remember today that your future is in your hands, and you have the right to own it. You are possible! The future is female,” she said.

The participants  were given sanitary pad, note books and other educational items.

They also watched  a short documentary on period poverty.

The NGO also used the ceremony to inaugurate  a female soccer team known as  Carol Queens.