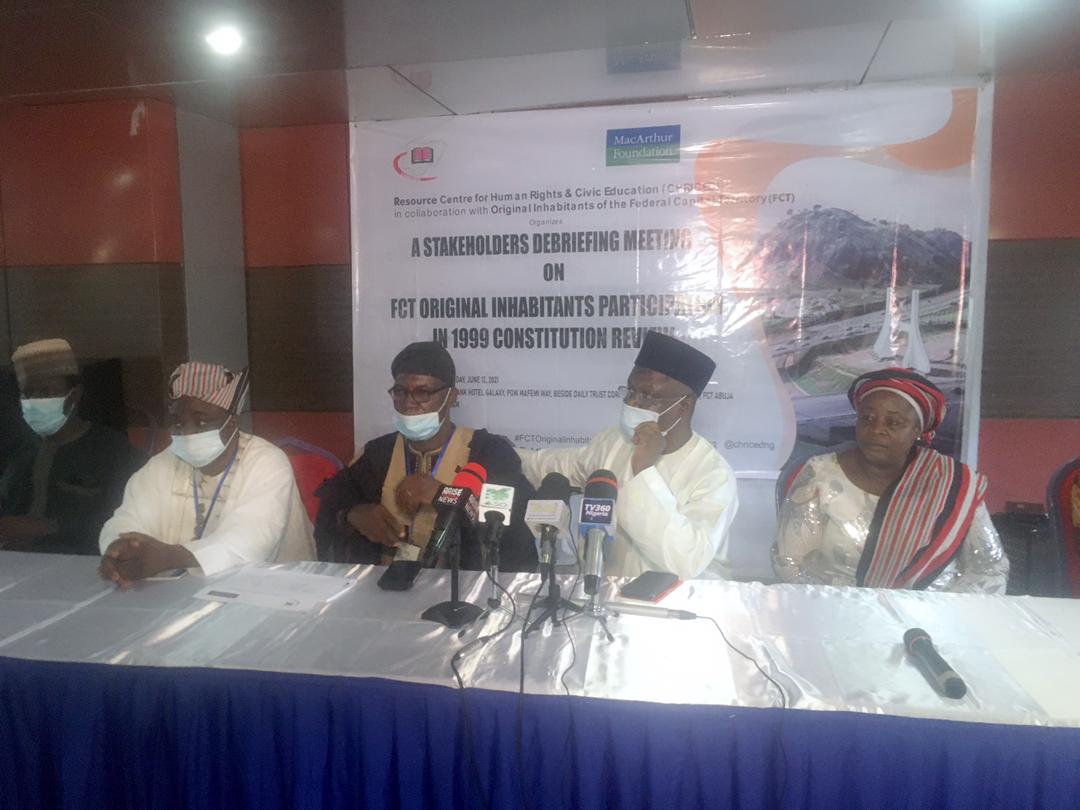 The Original Inhabitants Development Association (OIDA) in Abuja on Saturday called for the amendment of section 299 of the 1999 constitution to make Abuja a state.

Pastor Danladi Jeji, President of OIDA said this at a Stakeholders Debriefing Meeting for FCT Original Inhabitants on key outcomes from Public Hearing by Senate and House of Representatives on the review of the 1999 constitution.

Jeji said that the ancestral land of the people of the territory was not sacrificed by their forefathers but rather collected from them by the government.

He called on the natives of the territory to reclaim their land through peaceful dialogue while hoping that Abuja would be made a state.

“ Every state is observing democracy without FCT observing the day. This is because we are not recognised as a state, though they said this pace is a virgin land as claimed by the government.

“FCT is larger than eight states and these states have their governors and members representing them at the National Assembly.

“ All we want is that Abuja should be made a state so that we can also have a representation at the Federal Executive Council (FEC).

Also, Alhaji Yunusa Karmo, Vice President of the association said there was need for the territory to be made into a state status, thereby having 37 states.

Karmo condemned a situation where the government appoint ministers of FCT who after their tenure returned to their own state to become governors while the indigenous people have no such opportunities.

He said that what was obtainable in other states should also be made to happen in the territory saying that the unborn children might be made to correct the anomalies if government failed to respond to the demands of the people.

Similarly, Dr Ibrahim Zikirullahi, Executive Director, Resource Centre for Human Rights and Civic Education (CHRICED) called on the Nigerian state not to undermine or frustrate the demands of the people.

Zikirullahi said the anomalies of the statelessness of the original inhabitants of the FCT ought to be addressed immediately without further delay.

“ CHRICED unequivocally makes the point that amongst all the agitations for state creation all through the period of the constitution review, the case of FCT remains the most compelling and justifiable.

“ To redress the injustice wherein millions of FCT original inhabitants have been rendered stateless in their own ancestral homelands, the National Assembly urgently needs to tweak section 299 of the 1999 constitution as amended.

“ The section which states that the ‘provision of this constitution shall apply to the Federal Capital Territory, Abuja as if it were one of the states of the federation’ needs tone urgently amended.

“ CHRICED calls for the removal of the ’if’ which has rendered the state status for the original inhabitants of the FCT inchoate for so many years,” he said.

The executive director further appealed to the FCT minister to take urgent steps to address the economic impacts, which had deepened poverty, inequalities and the general state of despondency in the FCT communities.

He, therefore, solicited supports from stakeholders to ensure that the original inhabitants of the Terri reclaim their rights.