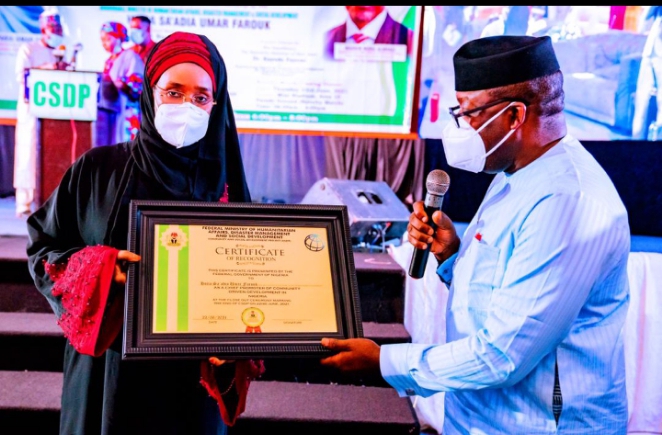 Bauchi, Plateau and Cross River states have emerged  winners for their performance in the just concluded World Bank supported Community Social Development Project (CSDP) that was implemented in 29 states of the federation over a period of 11 years.

This was contained in a statement issued  by Mrs Nneka Anibeze, Special Assistant on Media to the Minister of Humanitarian Affairs, Disaster Management and Social Development, Hajiya Sadiya Umar Farouq, on Wednesday, in Abuja.

The statement cited Bauchi state as the winner of the State Agency award for having the highest number of completed micro projects at 916.

“Cross River won the State Government with the highest amount of government contribution award with a total disbursement of N1, 646, 835, 451.71 to the project.

“Best State Government on replication of Community Driven Development (CDD) using government resources went to Plateau”, according to the statement.

Anibeze recalled that the minister, at the close-out ceremony marking the end of the program in the country, had commended the CSDP for operating with the core principle of the CDD approach.

“This is a development paradigm that focuses on the needs of the poor and vulnerable and empowering them with development resources to address their peculiar needs.

“Using this unique approach, the CSDP has implemented micro projects in poor communities across the 543 Local Government Areas of 29 states and the Federal Capital Territory (FCT)”, she quoted the minister as saying.

The poor communities were identified specifically through the use of Poverty Maps agreed to by each participating State and the FCT, she stated, noting that in its over 11-years of implementation, the CSDP successfully completed  16,166 micro-projects in 5,664 communities and amongst 934 vulnerable groups.

According to the Minister, the Project had made substantial impact on improving access of the poor and vulnerable to social and natural resources, as well as infrastructures across the benefitting communities.

In a goodwill message, Gov Kayode Fayemi  of Ekiti, who  spoke on: “Repositioning Nigeria for Greatness and Development; The Imperatives of Community Driven Development”, described the CSDP as one of the most impactful World Bank development projects in Nigeria with a great legacy.