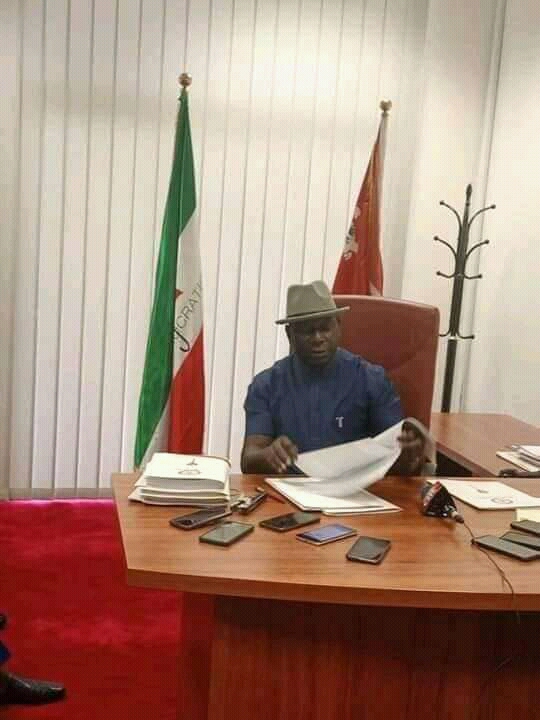 The statement read; “The election petition,which  was filed by Joe Agi, SAN on two grounds, to wit read, “That the 1st and 2nd respondents were not qualified to contest in the Cross River North Senatorial By-Election held on the 5th December, 2020 as they were not validly sponsored by the 3rd respondent and did not also  participated in all the stages of the election.

“That the 1st respondent submitted the 4th respondent affidavit containing false information of the fundamental nature in aid of his qualification for the election. All the parties to the petition filed their respective counter affidavits and other relevant processes.”

However,there were preliminary objections raised to the  competence of the petition on the grounds that the premises and grounds of the petition were pre-election matters that could best be determined by the High Courts.

“The petitioner also filed his response to the objections basing his argument around jurisdiction and qualification while maintaining that the  qualification referenced could be determined both as pre-election and post election.

“The petitioner argued that the tribunal has the jurisdiction to deal with the issue of qualification as used under section 138(a) of the electoral act 2010 as amended and that sponsorship is part of qualification. The tribunal heard all the arguments in respect of the applications and objections and reply: and proceeded to hearing the Petition on the merit, so that at the end of the tribunal all the issues would have been evaluated and dealt with comprehensively.

“It is worthy to note that during the petition trials, the petitioner in evidence admitted to the following; A. He is not a member of the 3rd respondent (PDP) That he left PDP since 2011.B. That he is not contending the validity of the votes cast; but that he is insisting that votes cast for the 1st are wasted votes.C That he is challenging the nomination and sponsorship of the 1st respondent by the 3rd respondent etc.
“On the point of pre-luminary objections, the tribunal agreed with the 1st respondent via his counsel Bode Olanipekun,SAN that “not validly sponsored, did not participate in all the stages of the election are not known to section 138(1)(a) of the electoral act as amended.

“The Tribunal while considering the objections and reply to the objection ruled that putting section 138(1) and the two grounds for the petition cannot both fit into section 138(1)(a), because “qualified” as used under the section Isa in relationto section 65 of the constitution which deals with qualification of an aspirant to the senate or house of representative of Nigeria.Not validly sponsored and non-participation in all stages of the elections do not come under this section as the are pre-election matters”.

The  statement noted that the tribunal further cited section 285(14)(a) of the constitution (as altered) to explain the meaning of pre-election matters are clearly provided by the constitution. Further cited Abubakar v  INEC (2020)12 NWLR (pt.1738) p.37, to also address one of the argument  of the petition about production of false information in form cf 001 by the 1st respondent to rule that that mere fact falls under pre election matters.

In ruling, the tribunal agreed with the submission of the 1st that the two grounds formulated by the petition are alien to the provision of section 138)(1)(a) of the electoral act and therefore incompetent.

The statement further said the preliminary objections succeeds and the two grounds accordingly struck out.The tribunal having struck out the two grounds of the petitioner proceeded  still to hear the petition on the in obedience to section 285(8) of the constitution of Nigeria just in case they were working in their conclusion.

“In doing so, the tribunal considered the petition in the light of “Has the petitioner discharged the burden of proof on him? Under section 133(1) of the evidence act the tribunal held that the burden of proof lies on the petitioner to proof what he asserts and the tribunal relied on Buharu v INEC (2008)12 SCNJ P.11 at p.68 On the question of validity of sponsorship the tribunal considered all the exhibits of the 1st and 3rd respondents which clearly indicated due process in all the stages of congresses, primaries and submission of documents to INEC as required by law and held that the 1st respondent was validly nominate and sponsored by the 3rd respondent.

“Whether the petitioners have the locus standi to file the petition? Thetribunal found that in the course of the hearing and during cross examination the 1st petitioner answered questions amongst others as “By alleging the 1st respondent was not validly nominated, I mean sponsorship arising out of primaries and forwarding the name to INEC by the political party and also subject to litigation if any.

“I ceased to be a member of PDP, the 3rd respondent herein as far back as 2017, and I have not returned. The name on exhibit “A1” is that of the 1st respondent in this petition who scored 129,207 votes, while I scored 19,168 votes. Let it be on record that I am not  contesting the scores, all I am saying is that the PDP had no candidate in the election and so the votes are wasted votes.”

According to the statement,“Based upon the admission of the petitioner, the tribunal asked the pertinent question to wit; in view of the admission by the 1st petitioner that he is no  more a member of PDB and that he left since 2017, does he have the locus standi to question the primaries of PDP? The definite answer is NO.
“The tribunal in fact made clear that going by the decision in PDP v SYLVA (2012) 13 NWLR (pt 1316) P.85at 126 B-F it is only an aspirant who contested a primary election that can approach the court under the provision of section 87(9) of the electoral act. On that note the tribunal held that the petitioner has no locus standi to challenge the election victory of the 1st respondent.

The tribunal submitted that the 2nd respondent Hon. Jerigbe Agom was not a candidate in the election and that the certificate of Return issued to him by the Independent National Electoral Commission was done wrongfully and should be discountenanced.

“It is not possible for the INEC to hear someone who has not submitted form CF001 and CF 002 as the nomination process is complete only when the Commission receives the necessary documents – see the decision in PDM Vs INEC 2020. On the whole, we hold that there is no evidence before us to  destroy the return of the first respondent as the duly elected senator represented Cross River North.

“We have studied exhibits A22, the Judgment of the Court of Appeal and we could not find where a certificate of Return issued to the first respondent is nullified and as such the issuance of the 2nd certificate of return to the 2nd respondent by INEC is wrongful and hereby discountenanced.”

Consequently, having exhaustively entertained all parties testimonies and arguments arrived at the decision that the petition lacks merit in its entirety and accordingly dismiss the petition and upheld the election victory of the Sen. Stephen Odey.