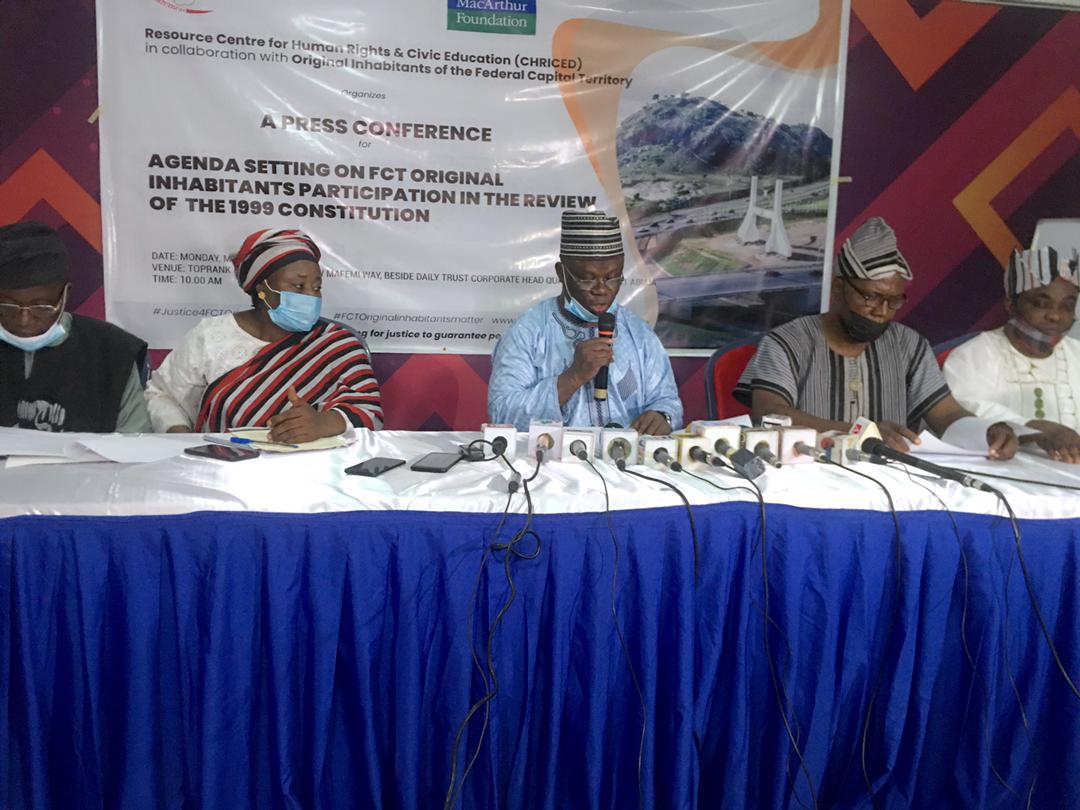 The Resource Centre for Human Rights and Civic Education (CHRICED) in collaboration with the Original Inhabitants of the Federal Capital Territory (OIDA) has called for the review of the 1999 constitution to grant FCT a statehood status.

Dr Ibrahim Zikirullahi, Executive Director of CHRICED made the call at a news conference in Abuja on Monday at the Agenda Setting on participation of FCT Original Inhabitants in the 1999 constitution review process.

Zikirullahi said the organisation deemed it necessary to reflect and brainstorm on the constitutional gaps which had undermined the political, civil, economic and cultural rights of the original inhabitants of FCT.

He said given the cries across the country for a fresh people driven constitutional template to reset Nigeria and deliver good governance, there has been worries that the current constitution review will not be far reaching enough.

“ The review of the 1999 constitution still present veritable opportunities to canvass the core issues aimed at addressing the marginalization as well as the entrenched violation of the rights of FCT original inhabitants.

“ CHRICED in solidarity with OIDA affirms that the discrimination against OIDA stands condemned.

“ These injustices are antithetical to spirit and letters of all known human rights instruments to which Nigeria is a signatory,” he said.

He said that CHRICED was committed to the task of amplifying the voices of Original Inhabitants communities to influence key governance processes.

He therefore called on the National Assembly to be mindful of the agitations across the country pleading with lawmakers to be committed to addressing the root causes of disaffection across the land.

Also, Pastor Danladi Jeji, President of OIDA said that true peace and unity could only be achieved when justice and fairness prevails.

“ In the light of the foregoing, it is right for the committee to amend relevant areas of the 1999 constitution to reflect the true structure of the FCT to accommodate indigenous natives to have their own state in order to promote social, economic need of the people.”

Similarly, Mr Giwa Bamaiyi, Public Relations Officer (PRO) , OIDA said there was need for the 8,000 Sqm of FCT to be made into a state status.

Bamaiyi condemned a situation where the government appoint ministers of FCT who after their tenure returned to their own state to become governors while the indigenous people have no such opportunities.

“ Our agitation is not for the creation of the state because FCT is already seen as a state.

“ According to section 297, sub section 2 of the 1999 constitution, the 8,000 Sqm vested in the hands of the Federal Republic of Nigeria, that section is a lacuna.

“ In this same constitution, section 44 as amended says no property shall be taken over by the Federal Government or individual or group of people.

“ This should be without adequate compensation and in agreement and consent of the owner whereby a tribunal or court of jurisdiction accent to the payment of the compensation.

“ This constitutional obligation has not been met by the Federal Government of Nigeria,” he said.

He therefore charged the senate to amend the constitution to make in such a way that the 8,000 Sqm with its 3.7 million people should be made to become a state.

He also pleaded that the FCT should be made to have its own Governor and have three senatorial slot just like every other state.