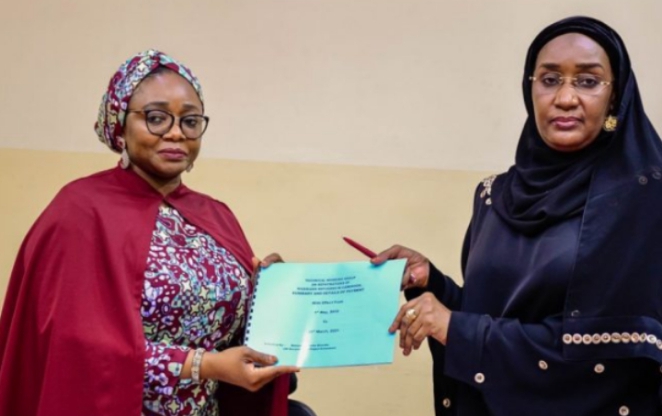 The National Commission for Refugees, Migrants and Internally Displaced Persons (NCFRMI) has expressed determination to deliver on its mandate and put the country on the global map of addressing issues on Refugees and Migrants.The Agency Federal Commissioner, Hajiya Imaan Sulaiman-Ibrahim, said this in a statement by Mr Sampson Ikemitang, the Head of Press and Public Relations of the Commission in Abuja.

Sulaiman-Ibrahim, who assumed duty at the Commission about five months ago, said agents of darkness and unpatriotic personalities have strategised to destroy the good works that the commission was doing.

According.to her, President Muhammadu Buhari and Minister of Humanitarian Affairs, Disaster Management and Social Development, Hajiya Sadiya Umar Farouq were not wrong to have moved her to the Commission.

“President Buhari and Hajiya Sadiya Umar Farouq wanted the best for the Commission, because, the goals and objectives of the Commission are bigger than the ambition of any individual.

” When I assumed office about five months ago, I promised to work in peace, harmony, equity and justice to achieve the mandate of the Commission as a team and as individuals.

“Don’t forget that whatever I am doing in the Commission now is a complementation of the former head of the Commission, because, he had done a lot concerning 2021 budget, contracts and expenditures before I took over.

“However, I want to affirmed and inform the world that, the commission is now.poised to deliver on its mandate and put Nigeria on the global map of refugees and Migrants.

“We are currently motivating our staff and making efforts to train them and build their capacity in addressing issues of IDPs, Refugees, Migrants and other Persons of Concern. We are focus and on course to deliver on our mandate,” she stressed.

Sulaiman-Ibrahim explained that people who were hell bent on assassinating her character with fictitious allegations and publications should embrace truth and stop the spread of falsehood.

“Evidence silence falsehood. NCFRMI is open for audit. I am just five months old on this position. We have a lot to do to deliver on our mandate and we shall not allow agents of distraction and unpatriotic elements to bring us down.

” We are determined to move the Commission forward to the promise land, where President Buhari, Sadiya Umar Farouq and the UN would be proud of.

“I love all my staff and would never intimidate anyone, because love, peace and unity is all we profess at the Commission. This has helped in bringing the staff closer to deliver on the Commission’s mandate.

“The Commission respects the procurement Act and would never act contrary to it. I am operating an open door policy. I allow all staff to come to me and contribute ideas on how to move the Commission forward,” she said.

She stressed that the Commission was doing a lot in term of healthcare and welfare for refugees and IDPs.

However, she emphasised that  in 2022, the Commission would ensure that Refugees Migrants and IDPs were carried along frequently in the area of health, social relevance and skill acquisition to enhance their livelihood.

“I called.on all well meaning Nigerians to disregard any malicious story or reports against me and the Commission, because, the Commission is on course to greatness and it is bigger than personal interest of person (s) who do not wished it well,” she said. (NAN)