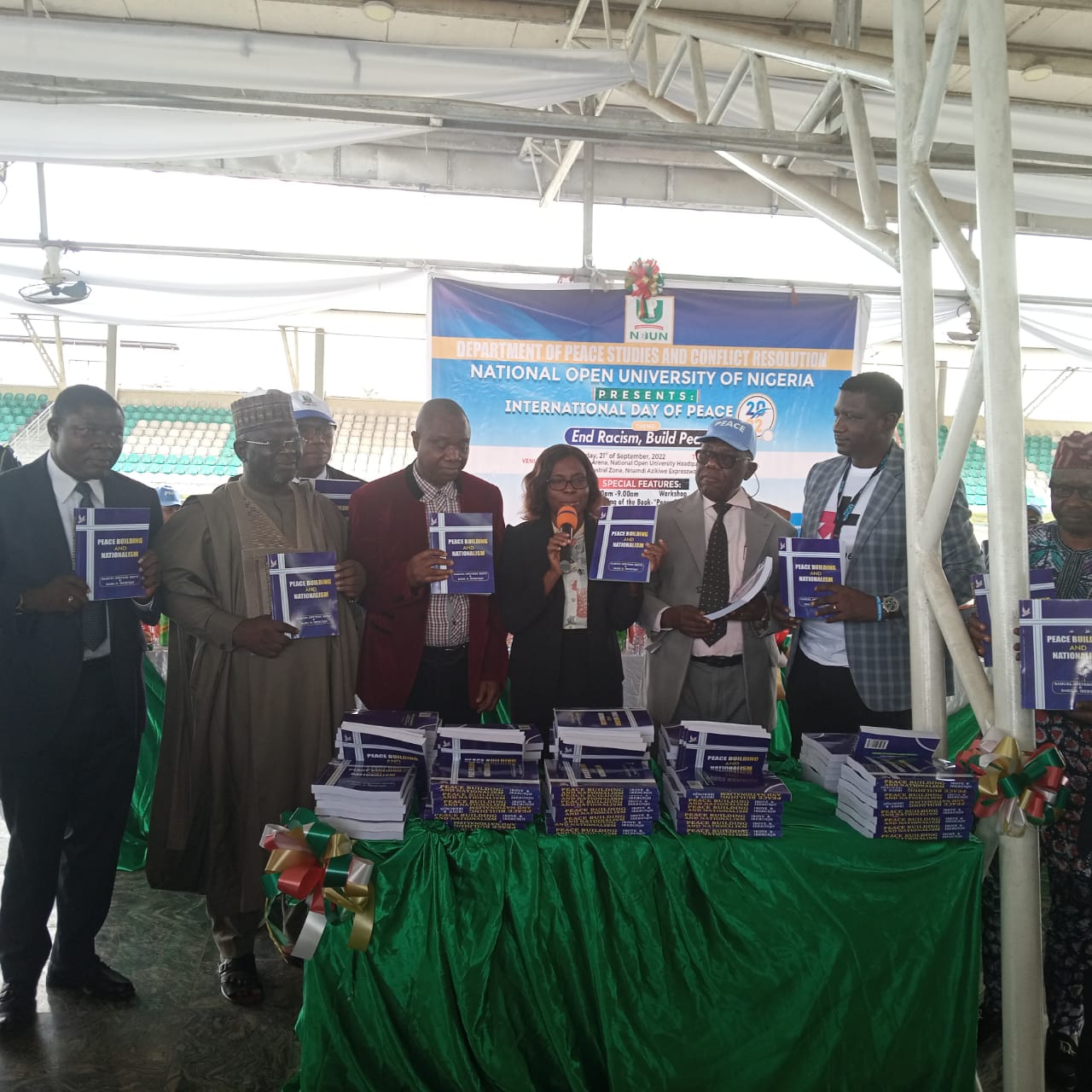 As Nigeria joins the rest to mark the International Day of Peace, academia has been urged to explore a balancing strategy on how spending on education sector would be improved in the face of huge defence budget.

The International Peace Day with the theme:’ End Racism, Build Peace ‘ is organised by the Department of Peace and conflict resolution, National Open University of Nigeria (NOUN).

The United Nations General Assembly (UNGA) has declared September 21 to observe the International Peace Day to strengthen the ideals of peace, through observing 24 hours of non-violence and cease-fire.

Audi, who was represented by Mrs Stella Oladeye, Assistant Commandant General, NSCDC, called on all strata of the country to play their roles in building peace for the development of the country.

According to him, there is no gainsaying that illiteracy is counterproductive to peace building and there are many children behind education line, these children are easily manipulated into destructive culture.

” Gender inequality in labour placement should be frowned at, as we all cannot but agree that a balanced gender approach could have a long way to reduce brutality in security apparatus in resolving issues in our society.

” The academia should continually explore a balancing strategy on how our spending on education sector should be improved in the face of huge defence budget.

“Knowing well, that an increased spending in education will later transmit to a low budget on defence.

” Let me quickly use this medium to appeal particularly to the political class, whose body language must transmit peace and not post-election violence. Let’s push aside violent traditions and teachings in all areas of our lives,” he said.

Also, the keynote speaker, Prof. Uwakwe Abugu, a Professor of Law, University of Abuja, called for collective engagement to ensure an end to racism and also build the peace in the country.

Abugu, who is the immediate past Vice Chancellor, Ave Maria University, Piyanko, Nasarawa State, charged Nigerians to join force to ensure peace especially as the country move into the 2023 general elections

” We need peace, without peace we cannot go anywhere and as a matter of fact more lives, more resources, more energy had been committed to building peace.

“So immediately after the Second World War, the United Nations committed to building peace saying that on no occasion should we have such amount of volume of loss of life because of lack of peace.

” United Nations made a lot of effort and in 1981 declared september 21 annually as International Peace Day. And this has been celebrated but here it is the first time the National Open University is celebrating the day,” he said.

Abugu added that building peace and ending racism was very fundamental to Nigeria, saying that the country needed the theme more than any country in the world.

He said that there was need to unite in humanity, regardless of tribe, religion, language, to move the country forward while churning all forms of religious and tribal sentiment.

” We know the present security situation in this country, all of us are not safe. You know the you cannot sleep, I cannot sleep peacefully in Nigeria because of insecurity.

” But we can build peace individually. If I commit myself to peace, and you commit yourself to peace and the third party commit to peace, all of us will have a better society.

” In Nigeria today, we have so much discrimination going on either in appointment to government offices, either by reason of your ethnicity or religion as so on as and it is diagnosed.

” So what we know is that racism and discrimination has a very backlash effect of under development because if the right person to do the job is not there, but the wrong person is there because of his religion, or because of his ethnicity, or because of where he comes from, he’s not going to deliver for public good.

” But if we are blind to racism, discrimination, religion, or ethnicity, we get the right person at the right place to do and deliver the good purposes of life for the entire nation, ” he said.

In the same vein, the Vice Chancellor, NOUN, Prof. Olufemi Peters said it was important for the country to create and make peace through many ways such as education, arts, sports, culture, justice and many others.

Peter, who was represented by the Dean of Management Sciences, Prof. Wilfred Ngbuanyi, said Nigerians must contribute to strengthen the ideals of peace so that the council could attain the upmost height.

Also, the United Nations Secretary General, Antonio Guterres, represented by Mr Peter Mancha, from the Nigeria UN office, peace is a noble and necessary pursuit of all people across the world.

Guterres said that the theme was a reminder of the many ways racism poisons people’s hearts and minds and eroded the peace of the world.

” Racism robs people of their rights and dignity. It inflames inequalities and mistrust and it pushes people apart at a time when we should be coming together as one human family to repair out fractured world.

” Instead of fighting each other, we should be working to defeat our true enemies; racism, poverty, inequality, conflict, the climate crisis and the COVID-19 pandemic.

” We should tear down structures that sustain racism, and lift up human rights movements everywhere,” he said.

The celebration also featured a book launch titled: ‘ Peace building and Nationalism ‘ by the Department of Peace and Conflict resolution of the university.