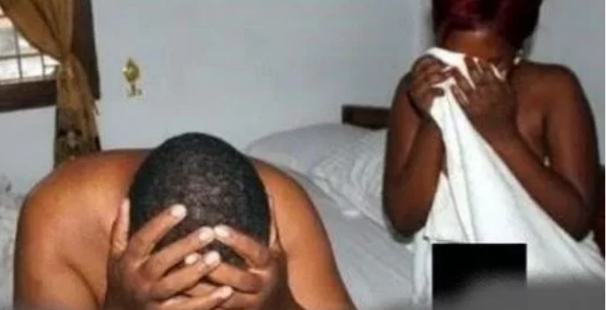 A Kenyan preacher from Lugari, Kakamega County was on Thursday, February 18 caught in bed with his neighbour’s wife, who is seven months pregnant, local publication K24 Digital reports.

The woman’s husband returned home from work unannounced, and caught the pastor, Peter Afagara, in bed with his spouse at 4am. The incident happened in Mukuyu, Mautuma area in Lugari Sub-County.

The woman’s spouse said he had beeninformed by a neighbour that his wife was secretly seeing the pastor, when he(husband) was away in Nakuru.

“On Wednesday night, I travelled to Lugari from Nakuru without alerting my wife.

At 4am, I went home unannounced, and caught the pastor in the act with my partner, the woman’s husband told the publication, K24Digital.

Immediately after the disappointing discovery, the aggrieved man informed the village elders about his predicament.

Appearing before the elders, the woman and her husband engaged in blame game, with the wife accusing her spouse of desertion.

The pastor, Peter Afagara, on the otherhand, admitted guilt, and asked his lovers partner to forgive him.

The elders ruled Afagara should pay a fine, which will be given to his lover’s spouse as compensation for the embarrassment caused.

The woman and her husband, on the other hand, were left quarrelling, with the man suggesting he would divorce the wife over her infidelity.