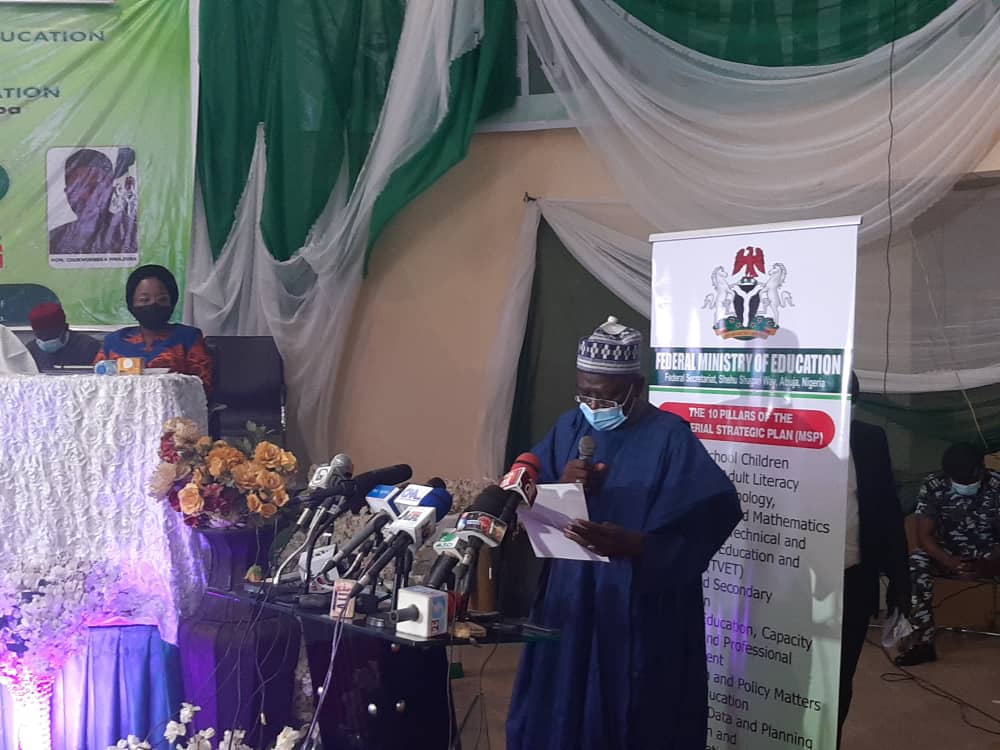 The Minister of Education, Mallam Adamu Adamu says that number of out-of-school children has been reduced from 10.1million in 2019 to 2020 down to 6.95 million through the Better Education Service Delivery for All (BESDA) initiative of the Federal Government.

Adamu was speaking at the 2020 Annual Ministerial briefing in Abuja on Thursday.

He said that BESDA initiative in 17 states had been responsible for an additional enrolment of 1,053,422 children

He added that the National Association of Proprietors and School Owners of Nigeria (NAPSON) were working closely with the Ministry to reduce the number of out-of-school children.

He said that the association had also taken over one million out-of-school children off the street, with each private school sponsoring five pupils.

” Under the initiative of BESDA, the Federal Government secured a World Bank credit facility of $611million to support 17 states in strengthening the Universal Basic Education as well as addressed the first pillar of the Ministerial Strategic Plan (MSP)on out-of-school children.

” As at today, we have recorded impressive school enrolment figures in 17 states of the federation where BESDA is being implemented.

“I can however tell you that through the BESDA initiative, we have reduced the figure of out-of-school children from 10.1 million since may last year to 6,946,328 million,” he said.

Adamu gave the figure as approved by the National Bureau of Statistics as at Dec. 2020.

He added that the adolescent girls initiative for learning and empowerment was also supported by the World Bank to deal with the challenges poised by adolescent girls who were out-of-school or had never been in school.

According to him, a World Bank facility of $500 million has been secured to ensure that these girls are taken off the street, trained and financially empowered to enable them live normal and quality lives.

On adult illiteracy, the minister noted that attention was given to the mass literacy sub-sector in the last one year.

” In the last two years , 1,900,000 illiterate Nigerians have been able to read and write in English or the three Nigerians languages through this effort. Out target on one million could not be reached due to COVID-19.

“We are working on an instrument that will also make it an offence for any adult illiterate not to be undertaking any form of learning. Today’s illiterates will breed tomorrow’s out-of-school children,” he added .

Also, the Minister of Information, Alhaji Lai Mohammed explained that President Muhammadu Buhari had challenged the ministers and top government officials to be unrelented in making Nigerians know what they do.

Mohammed said in view of this, the ministers were working hard in building, enlarging agricultural outputs for food security and export.

” In our stride to attain food sufficiency and power and transport and other infrastructural development, we are also working on expanding access to quality education, affordable healthcare, improve governance and improving security for all.”