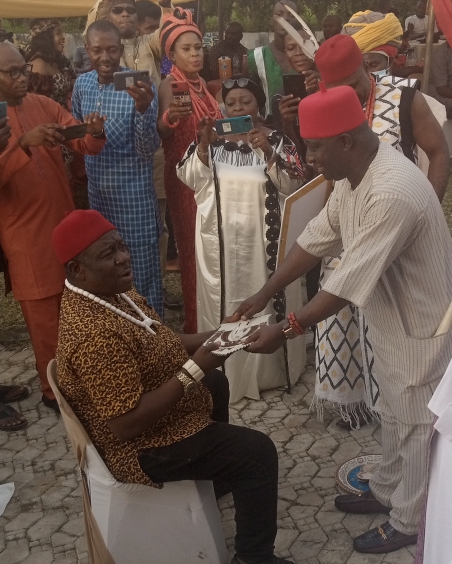 The News Agency of Nigeria (NAN) reports that also honoured is Dr Fahad Al Taffaq, the Ambassador of United Arab Emirate to Nigeria.

MAN reports that the event is an annual fiesta, which showcases Nigeria’s rich cultural heritage.The event was organised by the former Chairman of Actors Guild of Nigeria, Abuja, Mr Onwurah Ifeanyi, also known as ‘Agility’.

“This is a festival that Nollywood stakeholders put in place to always remind them of their roots and culture.

“In the time past, we were forgetting our roots, but now we are trying to see what we can do every year to bring people back.

” I used the festival to be a pointer to other African cultures. You can see people dress in Edo, Calabar, Yoruba, Hausa and other attire to attend. So that is the pointer.

“Aside the celebration, we are awarding a lot of people. The award became necessary because, so many people has helped Nollywood and humanity.

“So, from time to time, we award these people, because, when you praise somebody that did something well, it would encourage the person to do more, and that is why today we are awarding these people,” Ifeanyi said.

Also, Mr Emeka Rollas, the National President of Actors Guild of Nigeria said the New Yam Festival to an Igbo man was a celebration of good harvest of yam annually.

“It is believed that when you do not celebrate the harvest of yam in a year, that the next year’s harvest may not be fruitful.

“That is why it is very imperative as Nollywood has become the most important export of Nigeria as far as culture is concern.

“That is why every year, we gather here in the celebration of the yam as a symbol of unity for Nigeria and for the Igbo man.

NAN reports that while  Obi Cubana got the title of Ifeomaolibo, because now he has trained, sponsored and supported a lot youths to become self independent, Okafor got Aki Ogbocioma, because of his positive impact in the industry.

Taffaq also got the award of Ugocinba, meaning, An Eagle from a foreign land which is well cherished.Others that got awards include Francis Duru, Alhaji Abunakar Maikano, the Sapayi of Garki, Abuja and many others.

Meanwhile Bishop Oguba Owuocho John, the Secretary of the West Africa  college of Bishop said African cultures should not be allowed to die, adding that there is need to different between sacrifice and culture.

“Today we are taking about culture that does not involve sacrifice. This New Yam Festival is a point of contact where people interact with themselves, where some helpers locate people that they suppose to render help to.

Taffaq who received the award of Ugocinba said he was grateful for the honour.

“This event is one that will bring a lot of prosperity, support to the actors and the creative industry in Nigeria and of course it is going to be an important aspect of Nigeria.

“We at the UAE Embassy have been partnering with Nigerian Government and the leaders in the country’s creative industry.

“In 2019, before the COVID-19 pandemic, we organised the UAE-Nigeria Culture and Art Footbal in Lagos. It was well attended and a huge success,” Fahad said.

Another Awardee, Okafor lauded the organiser and appreciated the award.

NAN reports that the event attracted the big names in entertainment industry, traditional institutions, Ministry of Information and Culture and other relevant stakeholders.

High points of the event were the dance performances by the Gbayi and Ogene Dance Troups, and award of the titles and certificates to the awardees.(NAN)