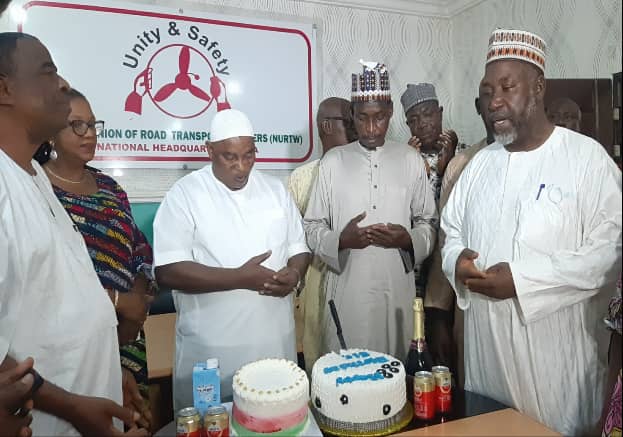 Prof. Tajudeen Ibikunle Baruwa, the President National Union of Road transport Workers (NURTW) has advised Drivers, both commercial and private owners to be security conscious and report any suspicions movement to security agencies.

Prof. Baruwa who gave the advise while addressing journalist during his birthday and 2nd year in office, called on drivers to adhere to the Federal Government and Federal Road Safety Corp (FRSC) Safety regulations especially during the ember months to reduce the rate of crime and road accident on roads.

The celebration was organized by the Executive top management staffs of the NURTW at the National Headquarters in Abuja.

Speaking on Nigeria @ 61 and the state of road networks and other infrastructural developments, the President was visibly delighted and appreciative to almighty Allah for his protection of the NURTW members during and after the COVID 19 pandemic lock-down.

According to him, the most challenging moment of his life as a newly elected President of the NURTW and Transport sector was affected by the Lock-down across the nation but gave Glory to God for his Protection and through the Federal and various state Government drastic support to the union through different interventions.

“Thus the Transport sector was the most affected by the Lock-down across the nation but today to God be the glory for his Protection and through the Federal and various state Government drastic support to the union through different interventions.

The Ogun State born unionist, further thanked the almighty Allah for the rate at which Nigeria as a Nation has developed in terms of human, infrastructure and technological development, which according to him cannot be compared to the 60s and 70s.

He said development was slow in terms of Education and health care delivery, which has always been the reasons for regular strikes in the sector, but he further argued that leadership is never easy, especially in a nation with a population of over 200 million people like Nigeria.

According to him the Federal Government and some states, such as Lagos, Rivers, Kano States etc, has been committing enormous investment in infrastructures in all segment of the economy across Nigeria and this include power, road construction and rehabilitation, building of new bridges in other to bring development closer to the people.

“Meanwhile, it is worrisome that some jobless and unscrupulous Nigerians will always destroy the roads by digging and vandalizing the infrastructures that Government both Federal and State, have spent money to construct.

“Especially at night, sighting a personal experience during one of his journeys to Lagos, just along Kogi – Jebba road, once challenged some people at night with my men along the highway.

“We had to forcefully collect their diggers and other materials before they ran into the nearby bushes hence all hands must be on deck as stakeholders by keeping vigil against the vandalization of public properties across the country,” he said.

However, he revealed the reasons for the vibrant and peaceful atmosphere that now radiates in and around the National Headquarters and NURTW state branches nationwide.

Proff. Ibikunle Baruwa, revealed that “My Style of leadership which is built on an all inclusive policy it is such that respects the collective experience of members of my executives and the entire staff to whom I thank for the success stories of our 3 years in office as a team and my birthday celebration.

“My basic philosophy as a leader is to always ensure the well being of al members and staffs on which the livelihood of our entire management, workers and passengers across Nigeria depends under the direction of the almighty Allah,” he said.

The celebration was agreed by all excos members officious, BOT member, senior and junior management staffs and many well wisher of NURTW in Abuja.

Representing the entire National Executive and staffs, the National General Secretary (GS) Alh. Comrade Ado pured encomiums on the National president for his great sense of humility, wisdom, kindness and passion for unionism coupled with the welfare package surprises during and after the COVID 19 lock-down.

Towards the entire staffs and his all inclusive leadership style which makes him the most accessible and transparent leader and president of the National Union of Road Transport workers (NURTW) of all times hence the wonderfully renovations of the NURTW headquarters as a monumental edifice that must be regularly upgraded a major outstanding and historic property of the union. (NAN)