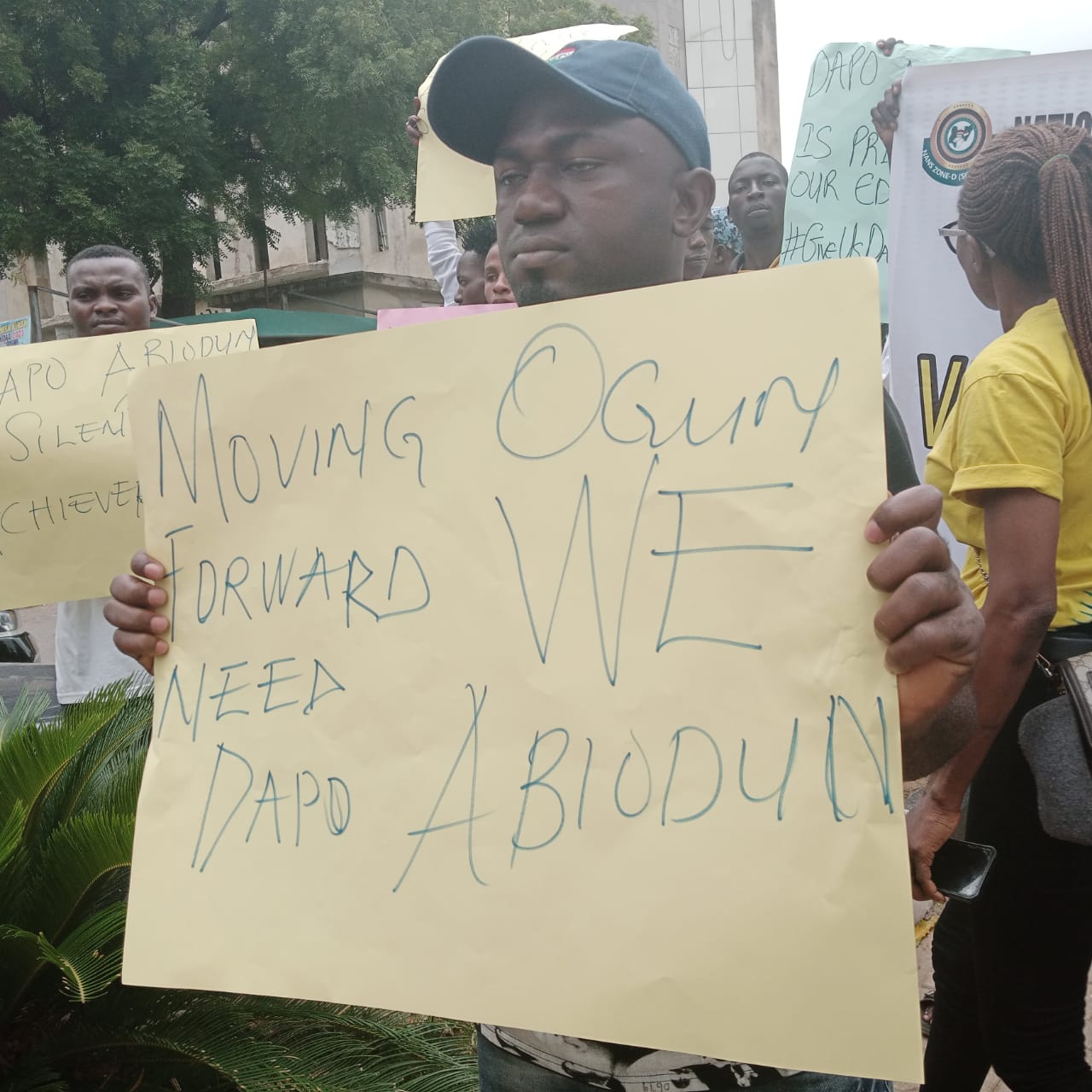 The National Association of Nigerian Students (NANS) Zone D has dissociated itself from the prosecution and disqualification of Gov. Dapo Abiodun from contesting 2023 elections by some faceless group.

The NANS South West Zone Coordinator, Mr Adegboye Olatunji made this known in Abuja on Monday, during a protest to the All Progressive Congress (APC) secretariat in solidarity of the Governor of Ogun State, Dapo Abiodun to run for second term.

He condemned the protest by the group as well a a petition to the Economic and Financial Crime Commission ( EFCC) and the National Chairman of APC as baseless.

According to him, Abiodun’s education policy remains enviable in the South West region because his coming on board has helped in the resuscitation of some tertiary institutions in the state.

” Their call for prosecution and disqualification of Governor Abiodun for running for second time in office through their petition to the EFCC copied to the National Chairman of the APC is nothing but ruse that cannot stand the test of time.

” We wish to advise them and their sponsors of this unwarranted political venture to follow the right channels through legal means to prove their allegations as their claims are nothing but figment of imagination.

” As students leaders from South West, we can state unequivocally that, the way and manner Abiodun is conducting the affairs of Ogun State, has hitherto improve the standard of living of all residents in the State.

” And of great concern to us as students is the improvement in the standard of education in Ogun State. His adherence to rule of law in managing the affairs of the state is highly remarkable to us as young people,” he said.

Olatunji, however, said that the student body passed a vote of confidence on the governor for his commitment and sacrifices toward education development in the state.

On the lingering Academic Staff Union of Universities (ASUU) and the Federal Government faceoff, Olatunji again threatened to shutdown major airports in the country if there was no resolution between the two parties.

Olatunji said that it was time both parties came together to resolve the issues leading to the strike as students was usually at the receiving end.

” We are planning to block government organisation that generate money for them if the ASUU issue is not resolved.

” We have been protesting on this issue by occupying major roads in the south west but we believe if we ground airports, the government will do something about the strike,” he said.

Speaking on the alleged N80billion fraud by the Accountant-General of the Federation, Mr Ahmed Idris, NANS Joint Campus Committee (JCC) Chairman, Mr Damilola Kehinde, said the alleged fraud was a slap on the integrity of the country when students were at home due to the ASUU strike.

Kehinde said that the educational sector was suffering as the country was not able to implement the United Nations recommendation of 26 percent budget on education.

” We have been at the forefront of the ASUU struggle ever since it commenced, we have shut down most of the federal roads in south west agitating that the federal government listen to the plight of ASUU.

” We have not shielded our sword in fighting for the lecturers and the generality of the students.

” If government officials or politicians can upgrade themselves every three months spending billions of naira for wardrobe allowances, I don’t think it is wrong to also equip our academics.

” What ASUU is clamouring for is not up to what a single person is embezzling. I think it is high time government have to rise by using some of this persons as deterrent to others,” he said.