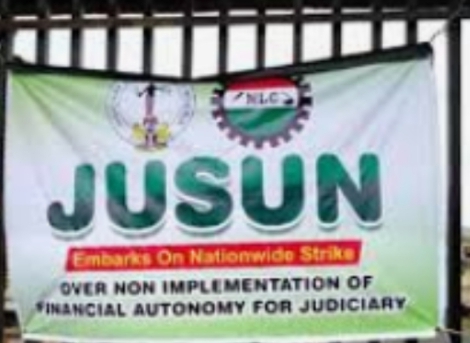 Some Lagos-based lawyers have described as laudable, suspension of the 64-day-old strike by the Judiciary Staff Union of Nigeria (JUSUN).

The lawyers told the News Agency of Nigeria (NAN) in  interviews on Wednesday in Lagos that the strike paralysed justice administration.

NAN reports that JUSUN  suspended the nationwide strike on Wednesday at a meeting of its National Executive Committee (NEC) in Abuja on Wednesday.

Members of the union had embarked on the strike on April 6 to press home their demand for full implementation of financial autonomy for the judicial arm of government.

The strike is the longest industrial action the Nigerian judiciary has ever recorded.

JUSUN embarked on strike in January 2015 for the same reason but it lasted for two weeks.

The union announced the suspension of the latest strike in a communique issued at the end of the NEC meeting on Wednesday.

It cited the intervention of the National Judicial Council and other stakeholders in reaching the decision to suspend the strike.

The JUSUN had in a circular on  April 1, directed  the strike to compel  state governments to comply with the Constitution, court judgments and other instruments which confered or re-emphasised financial autonomy for the judiciary.

In the communique, the NEC commended the chief justice of the federation and all heads of courts for patience and understanding throughout the period of the industrial action.

The NEC condemned withholding of salaries of judiciary workers by some state governors for embarking on the strike.

It urged the governors to do the needful.

The communique was signed by the JUSUN Deputy President, Mr Emmanuel Abioye, and General Secretary, Mr I. M. Adetola.

Reacting to the suspension of the strike,  Mr Chibuikem Opara, a lawyer with Justification Law Firm, Ikeja, said that JUSUN had made a statement by sustaining the strike for two months.

“I believe it is the right thing to do in calling off the strike after making inroads on its objectives.“This strike should teach every Nigerian a great lesson,” Opara said.

“Open-ended strike is dangerous and debilitating as well as counter-productive.

“The strike  paralysed the citizens from challenging some obnoxious policies.

“Conversely, it straightened the hand of the state as the court was not allowed to perform its role of being an arbiter between the governed and the government,” Owolabi said.

However, Mr Bayo Akinlade,  a former Chairman of Nigerian Bar Association, Ikorodu Branch in Lagos State, said:  “It is premature to suspend the strike having come this far.

“JUSUN should have stood its ground.”