ISWAP Fighters Set Military Base on Fire in Borno 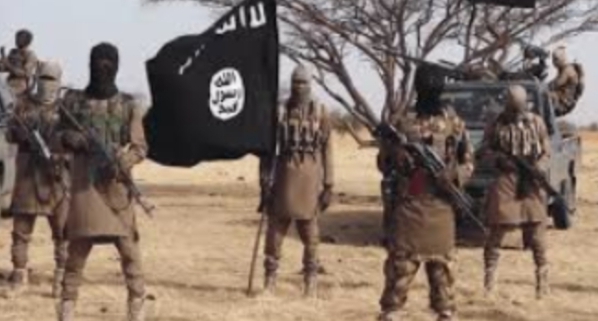 Insurgents suspected to be members of the Islamic State of West Africa Province(ISWAP) overran a military formation in the southern part of Borno State on Tuesday and cart away weapons after a fierce gun battle with the troops.

It was learnt that the fighters rode on about 10 utility vehicles to storm the military formation at Kwamdi village,Damboa Local Government Area, onTuesday evening.

They were said to have burnt down one Ammour Personal Carrier(APC) and a gun truck.

According to a member of the Civilian Joint Task Force (JTF), Hamidu Abu, the deadly group targeted soldiers camp but not residents.

He further disclosed that the base was razed down as arms and ammunition were stolen by the invaders.

“They came at about 4 p.m. and due to the sand storms it was difficult for soldiers to repel them. They burnt down the base including APC and four other vehicles.

“I can’t ascertain if there was any causality figure,”  Abu said.

A security source confirmed that the base came under attack from gunmen believed to be ISWAP fighters at about 4 pm and it lasted for about an hour and 30 minutes.

The source added that fighters seized the opportunity of the sand storm to penetrate the base.

“Our base at Kwamdi came under attackbut we didn’t lose any of our personnel to the attackers, unfortunately the base suffered some damages” the source said.

There has not been any official reaction from the Nigerian military.
Source: Daily Trust