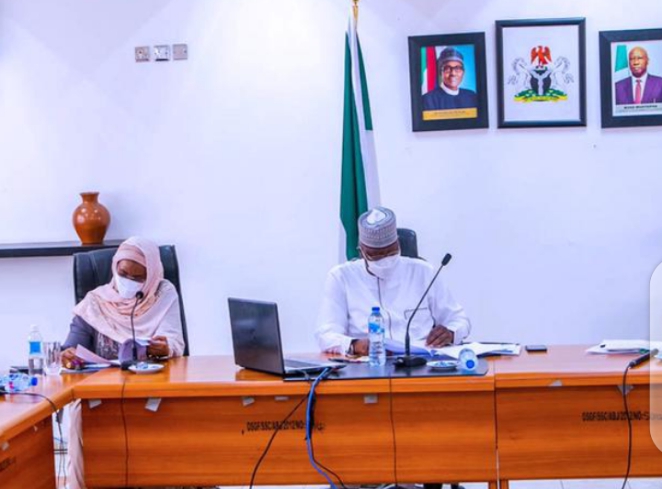 Hajiya Sadiya Umar Farouq, Minister of Humanitarian Affairs, Disaster Management and Social Development, has called for a working partnership among state governments and the ministry to stamp out poverty in the country.

The Special Assistant to the Minister on Media, Mrs Nneka Anibeze, said this in statement on Saturday in Abuja.

Anibeze quoted the minister as making the call at an extra-ordinary virtual meeting of the Forum of the Secretary to the Government of the Federation (SGF) and Secretaries to State Governments.

The meeting with the theme: “Strengthening National Poverty Eradication Strategies and Policies’’ is targeted at effective coordination of poverty eradication programs using a single document by all the states.

She noted that a careful evaluation of all major programmes and projects of government since independence on poverty reduction, alleviation and eradication showed that there was a need to harmonise and rationalise intervention strategies.

“This should also include their implementation which will lead to an environment where all programmes are centrally coordinated and monitored with a view to making the overall impacts transparently felt by all Nigerians.

“Though many actions were taken to address this in the past, the 2018/2019 Poverty and Inequality data in Nigeria, as released by the National Bureau of Statistics was not looking good at all.

“The statistic shows that the range of poverty headcount is between a high of 87.3 per cent in Sokoto State to a low of 4.5 per cent in Lagos, with a National average of 40 per cent.

“This alarming situation and the strategic need to address it is the primary reason why the administration of President Muhammadu Buhari established the ministry to provide National Coordination, strategies and policies for intervention,’’ Farouq said.

She also said that to ensure that these activities were well harmonised, it was imperative to intensify consultations to acquire the desired partnerships and coordination to succeed.

According to her, this reality and indeed the key stake held by the state governments in this process is the main reason why she requested the SGF to kindly avail them this platform to consolidate their partnerships and cooperation.

Farouq further explained that for ultimate success in attaining this vision, securing a partnership between the ministry and the various State Governments was paramount.

“This meeting, therefore, is the first but significant steps in cementing this inter- governmental synergy for the benefit of vulnerable people in our country,” he said.

Speaking,  the SGF, Mr Boss Mustapha, emphasised the need for a well-coordinated national, rather than disparate states and federal programmes aimed at addressing poverty.

Mustapha called on all the Secretaries to the State Governments to ensure effective machinery for state level coordination and federal level inter-phase with the ministry.

“The theme of this Forum is a pointer to the importance of dealing with the unacceptable levels of poverty in Nigeria.

“This situation is not abating in spite of the various efforts of  government at  all levels. Ineffective coordination within various levels of government has been long implicated as a reason for a not too visible performance.

“It is therefore, necessary to fill gaps, block leakages, remove overlaps and  increase collaboration and partnerships between the Federal and State Governments.

“This can be done through the office of SSGs so that we have a real National effort at tackling poverty in the country,’’ Mustapha said.

Similarly, the  Minister  of Women  Affairs, Dame Pauline Tallen, in her goodwill message, called for the full integration of women, Children and youths in  poverty reduction programmes.

Tallen pledged her ministry’s commitment to support the coordination efforts.

The Minister of Agriculture and Rural Development, Alhaji Mohammed Nanono , solicited a three tiered collaborative policy implementation through state, multi-MDA and community levels to unlock greater opportunities across all levels.

According to Nanono, using the agricultural sector as a key driver of poverty eradication efforts in the country cannot be overemphasised.

One of the major resolutions of the forum was the need for the Ministry of Humanitarian Affairs to anchor collaborative efforts across Federal level Ministries, Extra-Ministerial Departments and Agencies, states and local governments.

Others are development partners, Civil Society Organisations and the private sector to harmonise efforts and ensure cost effectiveness and efficiency.

The virtual meeting was attended by 60 participants including Mustapha, Farouq, Nanono, Tallen and Dr Yemi Kale, the Statistician General of the Federation.

Others included Dr Doyin Salami, members of the Presidential Economic Advisory Council as well as Secretaries to State Governments from 22 States and Permanent Secretaries (NAN)