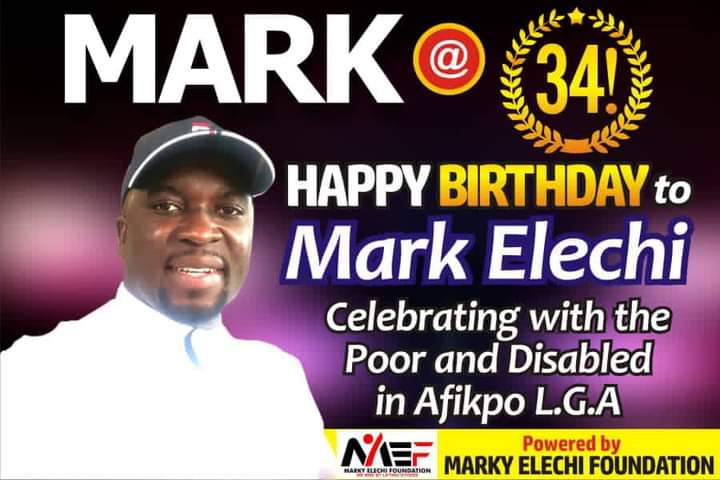 The Founder/ Chief Executive Officer of the foundation, Mr Mark Elechi,  disclosed this in an interview with the News Agency of Nigeria (NAN) on Saturday in Abuja.

Elechi said that the overall objective was to provide succor to the less privileged, widows and youths in the areas of employment, education, healthcare among others.

According to him, the foundation which started in December 2020 and was officially inaugurated in April has witnessed modest results in carrying out its interventions.

“We also distributed food items to widows and PLWDs in Afikpo North and registered 16 intelligent, but indigent students for the West African Senior School Certificate Examination across the 12 wards in Afikpo North LGA.

“We empowered 14 other indigent girls, whom we have trained in choice trades with tools worth N50,000 each, totaling N700,000, similar gesture would be extended to their male counterparts in May, next month.

“The foundation distributed 70 bags of rice and other essentials to the women of Uhu village in Orrah, Ozizza, in Afikpo North LGA.

“Also 30 PLWDs in different parts of Ozizza received 30 bags of rice and other essentials,” he said

“At the maternity wards of the Mother of Mercy Hospital and Mater Misericordia Hospital, all in Afikpo, the Foundation  distributed gift items to new born babies, while outstanding bills of some nursing mothers were also paid to ensure they were discharged.

“There are other competitions like cooking, religious quiz and others with winners going home with cash prizes ranging between N5,000 and N9,000 respectively every week.

He noted that the foundation empowered 14 beneficiaries of skills acquisition programme with sewing machines among other items.

Elechi disclosed that foundation gave N234,000 to Miss Chioma Ologwu, an indigent student of Alex Ekwueme Federal University Ndufu-Alike Ikwo to enable her return to school for her inability to pay  up the tuition fees.

“As I always say, you have not lived until you do something for someone who cannot repay you.

“Moreover, we rise by lifting others. All we have, God gave us and we should endeavour to give to humanity at all times,” Elechi said. (NAN)