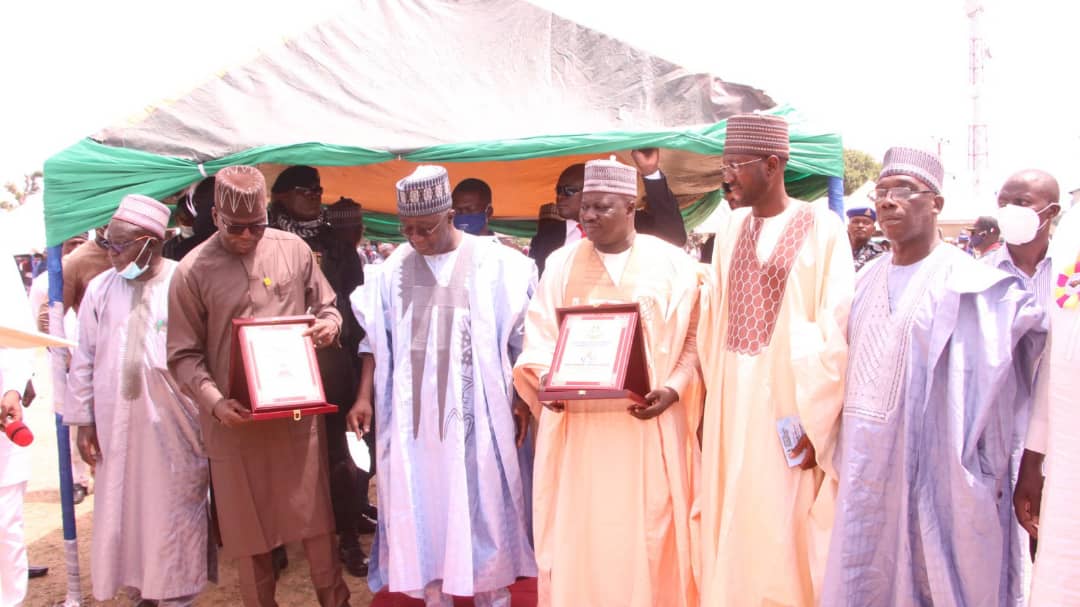 Prof. Suleiman Mohammed, the Chairman of the Foundation at the reception to honour the awardees at Laminga in Nasarawa Local Government Area said the awards were bestowed on them for their  positive contributions to the development of the community, Nasarawa State and Nigeria at large.

Mohammed, who is the Vice Chancellor of Nasarawa State University, Keffi said that the reception was also organised to rejoice with the NSCDC boss and Hon Shafa over their elevations.

” We have decided to organise this event to honour two of our members for their elevations,

” They have contributed a lot to the developmemt of Laminga as they are hard working, disciplined and committed to efforts in the upliftment of Laminga community.

” Hon Shafa is not from this community but he left a good legacies when he served as a teacher and  Prinicpal at Government Secondary School, Laminga apart from other contributions as he is the Treasurer of this foundation presently,” he said.

Bala Mohammed has urged the awardees not to relent in their efforts toward contributing positively to the development of the community and Nigeria as a whole.

He told the recipients that the foundation would continue to advise them to enable them  excel in their present positions.

Also speaking, Speaker of the Nasarawa State House of Assembly, Alhaji  Ibrahim Abdullahi appreciated the foundation for given the award to one of their own, Shafa and the NSCDC boss.

Balarabe Abdullahi said that the  honour done to the lawamker was done to the entire assembly.

He assured of the members readiness to support all Nasarawa citizens serving in various capacities at the National level to succeed.

On their parts, Sen. Abdullahi  Adamu (APC- Nasarawa West) , who is the Chairma of the occassion and Emir of Nasarawa, Alhaji Usman Jibril urged the awardees to succeed in their endeavours.

Speaking with newsmen, Shafa appreciated the foundation for the honour done to him while assuring of his continued commitment to contribute positively to the development of the community.

” I dedicates this honour to the people of Toto/ Gadabuke constituency who voted me as their representative.

” I served in Government Secondary School  Laminga as a teacher and later a principal  before my people elected me to the House.

” I want to assure my people of good representation: and for Laminga community, I will continue to contribute my quota to the development of the community, ” he said.

The lawmaker, who is the Chairman, House committee on Health, has called on the people of the state to support Gov. Abdullahi Sule’s administration to succeed.

The News Agency of Nigeria ( NAN) reports that those dignitaries that  attended the occassion include Rep. Abdulmumini Ari, state House of Assembly members, other politicians, traditional rulers and religious leaders among other well wishers. ( NAN)