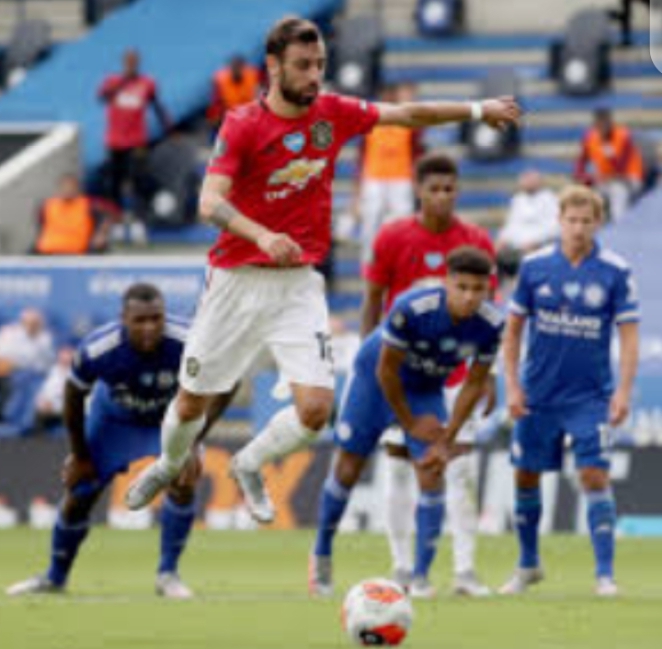 Bruno Fernandes blazed a stoppage-time penalty kick over the crossbar as Aston Villa earned a shock 1-0 victory at a below-par Manchester United in the English Premier League on Saturday.

Kortney Hause’s 88th-minute header had put Aston Villa on course for their first league win over Manchester United since 2009.

But the defender’s handball gifted United an opportunity to steal a point, only for Fernandes to miss the target.

Since Cristiano Ronaldo re-signed for Manchester United, there has been much debate over who will take penalty kicks and free-kicks this season —- Fernandes or his fellow Portuguese.

It was Fernandes who took the first direct free-kick on Saturday, firing into the wall, with Ronaldo getting the next one.

Fernandes, following Hause’s handball, never looked back as he placed the ball on the penalty kick spot in the 92nd minute.

But last season’s top goalscorer missed only his second penalty kick for the club to the dismay of an expectant crowd.

“First of all, the way they (Aston Villa players) get round the penalty kick spot, get round Bruno and that, that’s not to my liking,” Manchester United manager Ole Gunnar Solskjaer said.

“Bruno is usually very good in those positions and unfortunately he missed this one.”

In truth, Manchester United got what they deserved.

Aston Villa had two great opportunities to break the deadlock in the first half with full-back Matt Targett blazing over from two metres out.

That was before Ollie Watkins was denied by a fine save from Manchester United goalkeeper David de Gea.

The home side, encouraged by a frustrated Old Trafford crowd, stepped it up late in the match.

But Hause climbed highest to stun the hosts before Fernandes’ miss and Manchester United tasted league defeat for the first time this season.

That second successive home loss in all competitions means Manchester United dropped to fourth in the standings on goal difference, with the top four sides all on 13 points.

Solskjaer called for a fast start from his side in his programme notes, having seen his team often struggle to get going.

And that is exactly what he got as Fernandes wasted a great chance inside two minutes.

However, the hosts tailed off and really should have gone behind at half-time as Targett and Watkins missed great opportunities.

The home fans were getting restless as the Premier League’s top goalscorers struggled to create clear-cut chances.

It was just two headers as close as Manchester United came to breaking the deadlock before the break.

The game opened up as the second half wore on with Mason Greenwood going close, before De Gea denied Watkins with another fine save.

But the Spanish goalkeeper could do nothing as Hause powered his header home, sparking wild scenes of celebration in the away end.

The headlines, however, went to Fernandes, as his miss gave Aston Villa a famous and thoroughly deserved success.

“It (an Aston Villa win at Old Trafford) has been a long time coming,” Aston Villa coach Dean Smith said. “Our performance levels have been good the last couple of times we’ve been here.

“What that does is it gives an awful lot of belief to the players now.”