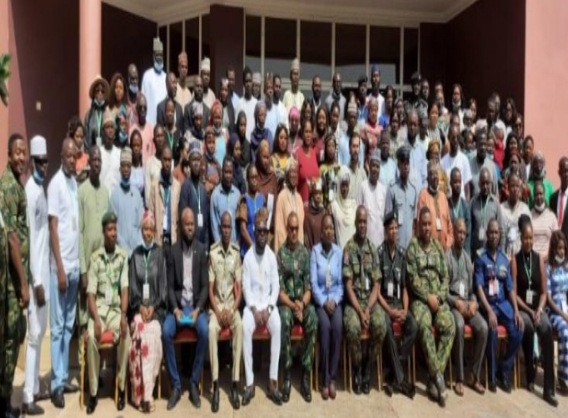 The Nigerian Army says it is engaging social media bloggers and online journalists in the country to combat the fake news syndrome.

The Chief of Civil Military Affair, Maj.-Gen. Markus Kangye, stated this at the 15th Edition of Social Media Influencers Seminar for social media bloggers and online journalists in Kaduna on Monday.

Kangye, who was represented by Brig.-Gen.

Emmanuel Egbe, said that the event was organised by the Department of Civil Military Affairs of the Nigerian Army in collaboration with Security Affairs Limited.

The theme of the seminar is, “Civil-Military Relations: The Evolving Role of the Social Media in Support of Nigerian Army’s Non-Kinetic Line of Operations”.

He said that cyberspace was the latest domain of modern warfare, adding that social media present a veritable tool in influencing and shaping public opinion, critical in deciding the outcome of battles.

He said that the interactive session was organised to provide an opportunity to freely interact, discuss, share ideas, and rub minds particularly towards eradication of fake news syndrome.

According to him, security is everybody’s business, stressing that social media bloggers and online journalists have a very important role to play in the promotion of peace and security in the country.

“This is because what you say, the way you say it and how it spreads have far reaching implications than most of us think.

“As such, social media has a very crucial role to play in support of the Nigerian Army’s non-kinetic line of operations as well as shaping public opinion.

The chief of civil military affairs said that there was so much that social media can do in support of Nigerian Army operations across the country.

“For instance, the recent surrendering of Boko Haram insurgents and their humane reception by the Nigerian military has been perceived negatively by the online community, and by extension Nigerians.

“However, these developments ought to be a testimony of the effectiveness of the efforts put in place by the military to defeat insurgency.

He said that tackling insecurity generally involves the use of kinetic and non-kinetic approaches.

He said that the approaches were complementary, stressing that encouraging criminals to surrender does not mean they would evade prosecutions for crimes committed.

“Therefore, it is necessary for social media bloggers and online journalists to know and enlighten the populace on the dangers of misinformation or misinterpretation for the general security of our dear nation,” he said.

Kangye said that the Nigerian Army is making giant strides in the fight against terrorism, insurgency, banditry, and other forms of criminality in the country.

He, however, pointed out that such efforts are always under-reported, thereby undermining the unrelenting efforts and sacrifices of selfless soldiers at tackling insecurity.

He added that conversely, most media houses prefer to propagate sensitive reportage that scare and attract negative attention rather than headlines geared towards celebrating the gallantry and efforts of the Nigerian troops.

“Our media give credence to the activities of criminals as well as boost their morale and confidence to commit more crimes.

“It is my belief that our interaction and cross-fertilization of ideas will make Nigerians better informed, imbibe in us the spirit of patriotism towards the realisation of a prosperous Nigeria of our dreams.”

The Executive Director, Security Affairs, Mr Austin Peacemaker, said that the seminar was first conducted in Port Harcourt, later in Maiduguri, Owerri, Ibadan, Lagos, among other locations across the country.

Peacemaker said that the essence of the seminar was to among other things bridge the gap between the Nigerian Army and the civil populace.

“We came up with this initiative to ensure that there is continuous dialogue in a good democracy, we believe if we talk, engage and rub minds we won’t fight or clash,” he said.