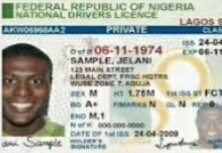 The national driver’s license is, incontrovertibly, not just a permit or authorisation to drive a vehicle on Nigeria roads but a highly valued identification and security document as well.

Since its inception in 1990, the National Driver’s Licence Scheme NDLS has evolved with successive leadership in the Federal Road Safety Corps (FRSC) to make such a document relevant to national development.

The evolution involves harmonising and standardising the issuance of Driver’s Licence and vehicle number plates in the country for the purpose of ensuring security, control and safety.

It explains that the NDLS is intended to manage crisis of issuance and administration of driver’s licence that will check usual complaints on the genuineness of the document and various allegation of corruption in the issuance.

For a credible driver’s licence, therefore, FRSC Corps Marshal Boboye Oyeyemi said at the presentation of the report of the Committee on Citizens Data Management and Harmonisation to President Muhammadu Buhari rerently that the National Identification Number (NIN) would be compulsory for processing and issuance of driver’s license.

He said that there was need to improve on the driver’s licence production and the FRSC management was committed to bringing to bear the full weight of the commission’s regulations in ensuring discipline.

“To curb corruption in the driver’s licence production chain, NIN is now mandatory for any one applying for the licence.

“We are hopeful that if you want to renew your licence or you want to get a new one, it is going to be compulsory that you get a NIN before you proceed,” he said.

Oyeyemi, however, noted that the same would apply to vehicle registration, saying that Nigeria, like many other countries, was experiencing challenges relating to identity theft.

He said that this required that responsibility agencies of nations must firm-up their identity systems such that all avenues of breaches would be effectively closed.

“Without a NIN, you cannot continue with any vehicle registration. This is also to ensure that the correct information is provided.

“For instance, the Nigeria Immigration Service (NIS) has already adhered to this by ensuring that NIN is compulsory when applying for international passport or visa.

“So, this is very important to the FRSC as it would ease the processing of the driver’s licence to avoid double identity as well.

“This is also part of efforts we are putting in place to fight corruption and this is also a major way to curb crime as well because we have a lot of people that have different identities.

“Now, the National Identity Management Commission (NIMC) will play their role by ensuring that everyone has the NIN so as to avoid double identity and this will be automatically imported to our site to ease the production of the driver’s licence,’’ he said.

The FRSC boss said that the corps has 37 DLCs and 217 work stations nationwide with the intent to expand and make the processing centres to perform effectively such that the expansion and the entire programme could be justifiable.

“Recent report of network hitches and downtime was rampant but it has been addressed with the appropriate vendors so as to keep the scheme running hitch-free.

“All DLCs must take advantage of the effective network to improve on service delivery.

“I hereby reiterate the commitment of management towards the continuous maintenance and upgrade of all our platforms to constantly meet with the demands of the contemporary society.

“Management has decided to expand the scope of coverage nationwide, hence 571 station offices have been established signalling that the presence of FRSC has extended to all local government areas of the federation, with the exception of riverine areas.

“By implication, road safety education and advocacy has been taken to the grassroots. The corps data gathering and general data management will be enhanced to give better policy advice to government on road transport matters,’’ he said.

Corps Public Education Officer Bisi Kazeem, however, warned personnel against extortion or any other sharp practices that could tarnish the image of the corps.

Kazeem said that FRSC would not hesitate to punish any personnel found extorting driver’s licence applicants.

Kazeem also said that the reports concerning the issue of extortion was getting alarming so much so that the FRSC collaborated with the ICPC and Department of Security Service (DSS) to check it.

“They deployed technology and made the arrest. The exercise will be sustained to rid the corps of bad eggs.

“We abhor corrupt tendencies. There are internal mechanisms — the Corps Marshal Monitoring Unit and Surveillance and intelligence Unit.

“There are also zonal commanding officers unit of surveillance and monitoring, sector commander’s unit, all aimed at checking excesses of marshals.

“You will realise from the report that it was a joint effort. We have always been initiating and calling for all hands to be on deck to rid our activities of corrupt tendencies.

“This is not also different. The indicted officers are already placed on interdiction which implies the payment of half of their salary until their cases are disposed of,’’ he said.

“You can renew your vehicle particulars and even pay for your fines at anytime, anywhere with just a click on your mobile phone handset, laptop or iPad.

“All you need to do is to have data on your device, log on to the service address and follow the instructions to the end.

“When you do this, you have the confidence that you are paying directly to the government.

“By so doing, it is optional if you decide to seek the assistance of either touts or agents it whosoever, but an easier, more reliable option has been made available,’’ he said.