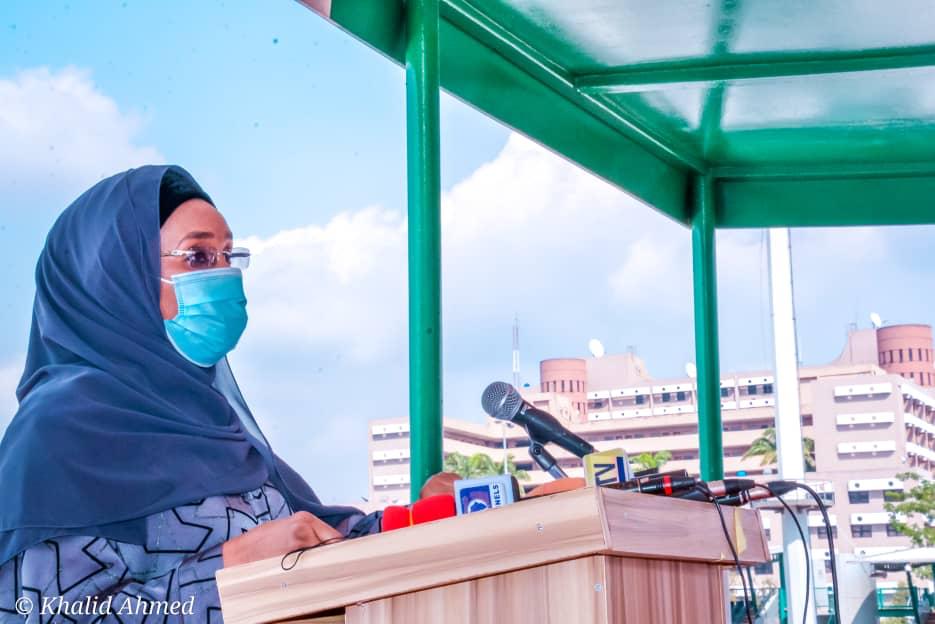 Sadiya Umar Farouq, the Minister of Humanitarian Affairs, Disaster Management and Social Development has handed over 40 Operational vehicles for onward distribution to Coordinators of the State COVID-19 Action Recovery And Economic Stimulus (NG-CARES).
This is contained in a statement issued by Mrs Nneka Anibeze, the Special Assistant on Media to Farouq on Wednesday in Abuja.
The vehicles, procured by the Federal Project Support Unit of the Ministry were handed over to the  Minister of State for Budget and National Planning Mr Clem Agba
The NG CARES is the Federal Government initiative with support from the World Bank to mitigate the effects of the COVID-19 pandemic.
Presenting the vehicles, Farouq thanked the World Bank for coming to the aid of the poor and vulnerable people of Nigeria affected by the COVID-19 pandemic.
“I strongly believe that the vehicles that are being commissioned today will go a long way in assisting the State Coordinators of the programme in carrying out the task of alleviating the suffering of ordinary people in the country.
“Let me also commend the efforts of the steering committee for N-CARES and the Federal Cares Technical Committee for their efforts in ensuring that the intervention from the World Bank gets to the people at the grassroots.

“There is no doubt that this assistance from the World Bank will impact on the beneficiaries as well as contribute to the rebuilding of the economy and prosperity in Nigeria.
“I therefore urge the states and the Federal Capita Territory (FCT) to ensure adequate utilisation of the vehicles and the resources from the World Bank to bring happiness to our people,” Farouq said.
Speaking, Agba said the programme  would assist vulnerable Nigerians who were hit by the pandemic.
“The FG has approved the Nigeria COVID-19 Action and Recovery and Economic stimulus programme which  is a multi sectoral programme.
“It is  design to provide immediate emergency relief to vulnerable and poor Nigerians, small holder farmers, and small and medium enterprises that were adversely affected by COVID-19. pandemic.
“This was facilated by the World Bank grant of  750 million dollars over a period of two years  starting from 2021 to 2023,” Agba said.
Agba thanked Farouq for the special role played by the Ministry, her untiring efforts and facilitatory role played by the agencies under her supervision in the preparatory activities of the N- Cares Programme.
He said each state would receive the sum of  20 million dollars over a period of two years while the FCT will get 15 million dollars and the Federal Care Support gets 15 million dollars respectively  with effect from June 30, 2021.
The handover of the vehicles is preparatory to the implementation of the NG CARES programme. All States and the FCT are participating in the two-year emergency programme. (NAN)