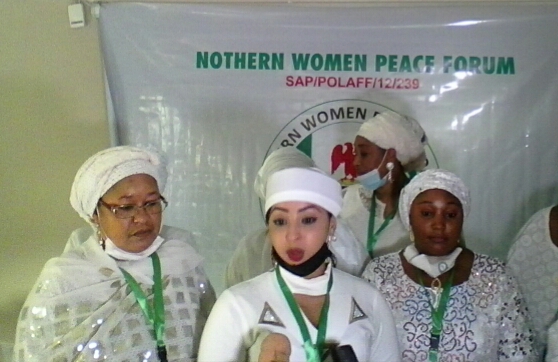 With the killings of no fewer than 43 farmers in Borno during the weekend and killing of eight persons in Kaduna, Norther Women Peace Forum, a Non Governmental Organisations has called on government to bring the perpetrators to book.

The National Coordinator of the Forum, Hajjya Binta Kuraye made the call in a news conference  on Monday in Abuja.

Kuraye said the recent killings of Rice Farmers in Borno, North East Region of the country is a source of  concern to the Group adding that they are not happy about it.

“Aother one happened recently where not fewer than eight people were killed in Kaduna.

“We want the government to bring all the perpetrators to book. We want government to deal with kidnappers, Boko Haram Members, rapists, bandits and their informants; these are the enemies of peace and love in the country.

“Whether you are a Christian or Muslim, God do not permit the killing of another human being.

“To all the enemies of peace and love, repent from your evil and wicked ways or else the wrath of God will visit you and you will be expose,” Kuraye said.

She emphasised that Nigeria is blessed with human and natural resources.

She appealed to the 36 state governors to call for fasting and prayers to solve the many killings; adding that women too should always pray for the country.

Also speaking, the National Secretary of the group, Miss Amina Goya said the farmers killed in Borno were vibrant young men with mothers and children to feed.

Goya called on the government to do better than what it is currently doing on the insecurity and killings in the country.

Mrs Iyabode Oyetunde, the National Public Relation Officer of the group said it was regrettable that a first class chief was killed in Ondo.

Oyetunde said the insecurity is affecting all parts of the country and called on government to organise a stakeholders meeting to find a lasting solution to the killings.