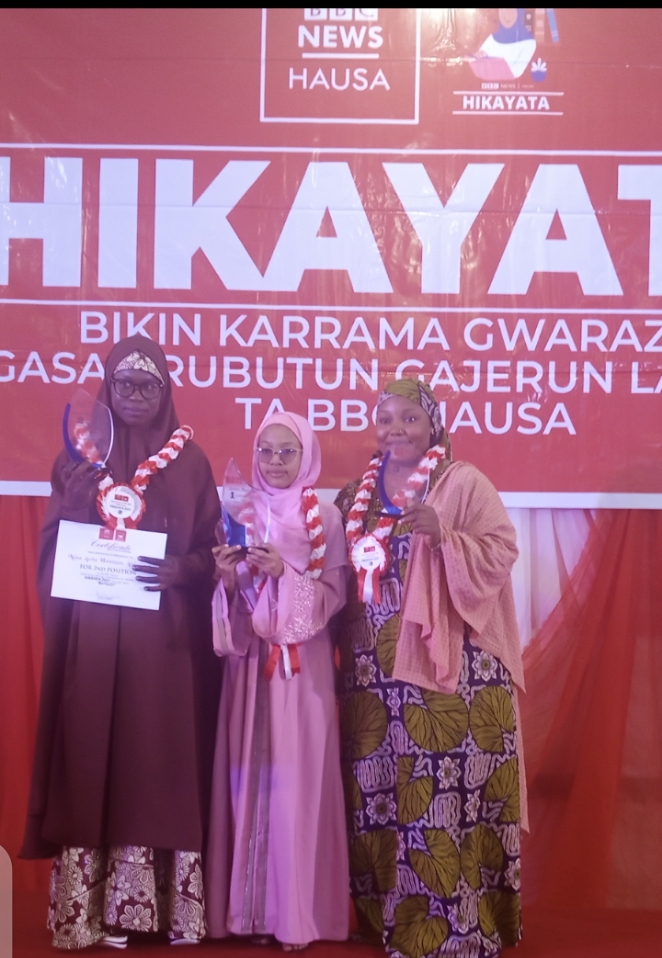 HammerTimes reports that  Dalil won the context with the story ” Hakkina” (My Right) and was announced the overall winner on Friday night in Abuja.

She was awarded a cash prize of 2000 dollars and a plague.

The second prize of 1000 dollars and a plague went to Nana Aicha Abdoulaye, 27, from Niger Republic, and wrote a story titled: Butulci (Betrayal).

Zullaihat Alhassan, 29, came third with the story titled: “Ramat” which talked about justice for the downtrodden and was awarded 500 dollars.

In his remark, the Head of BBC Hausa Operations in Nigeria, Malam Aliyu Abdullahi Tanko said the 2021 edition of Hikayata got entries from Cameroon, Sudan, Ghana, Niger Republic and other African countries.

“However, we hope that the entries that won the 2021 Hikayata will be the solutions to the issues in the society.

“I appreciate those who won, but for those that could not make it to the victory stage this year, I pray and hope they will benefit next time,” Tanko said.Tanko said the BBC Hausa Section is on all social media platforms, adding that in 2022, it would go intoTiktok

Meanwhile, Dalil told NAN that her story was about a 15-year old girl, whose step father raped her and her mother threatened to killed her if she exposed the act to anyone.

She said the girl eventually wrote a letter to her class teacher, who informed the police and the step father was arrested, prosecuted and sentence to 200 years in prison.

According to her, if heavy penalty is awarded to perpetrators of such crime, it will go a long way to reduce the rate of such crimes in the society.

Also, Abdoulaye told NAN that her story “Butulci” was about a woman who got married to a man and out of greed set her up for a kidnap.

She said the husband arranged with his criminal gang to kidnap her while she was pregnant with twins to demand ransom from his father-in-law, but the woman escaped and exposed her husband who was ater arrested.

On her own part, Alhassan said her story was about the son of a female police officer who raped her housemaid.

She said the police woman without sentiment ensured that justice was done for her housemaid and her son was sentence to many years in prison.

According to reports the award night attracted top officials from the media industry, Nigeria Union of Journalists, wife of the Kano State Governor, Governor of Jigawa and many others.