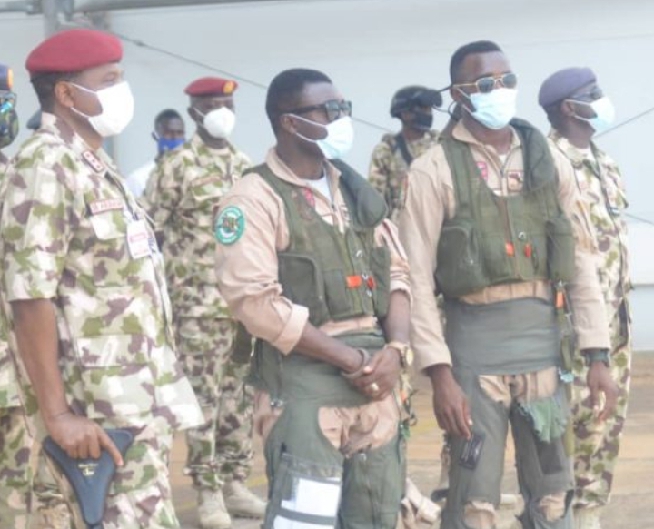 The Chief of Air Staff, Air Marshal Sadiq Abubakar, says the Nigerian Air Force (NAF) will continue to identify and clear bandits from their hideouts, as the NAF begins bombardment of bandits locations in Kaduna and Zamfara axis.

Abubakar stated this on Tuesday while supervising the operation, code named KASHE MUGU 2, at the NAF Base, Kaduna.

“There is no hiding place for bandits, we will continue to identify their hideouts and cleare them.

“Those bandits will no longer be there again, there is no hiding place for bandits in the forests.

“This operation will translate into additional security for our people; we will make sure if they come out, our sister services will neutralize them, police will also be there to ensure the communities are secured.

“Those of them that think they could hide in the forest; there is no hiding place anymore, we will continue to work on them, this is the second cushion they have just conducted, they are going for another one.

“We will make sure that all the identified camps that we have seen particularly around the border between Kaduna and Zamfara states are cleared.

“We will continue taking ISR missions to identify other camps wherever they are. Each camp that is identified will be cleared”, he said.

Abubakar said the Air Force was fully out secure the North West, North Central and the whole county where bandits and terrorists elements were operating.

“We want to make sure that those who think they can establish locations within the North West especially the ISWAP elements, to send a clear message to them that they will not have the opportunity to do that.

“This operations is also taking place in the North East and we are there in Katsina, Kaduna  Zamfara and Niger states. All hands are on deck and we are doing our best.

“I want to appreciate the President for all the support, you can see the number of platforms that are here, both helicopters, fighter aircraft, eye sarrol aircraft that carries cameras to see what we are doing.

“Without the support of the Federal Government we wouldn’t have had all these aircrafts here, and we have another set of aircrafts in the North East that are equally fighting.”

The Air Chief stressed that intelligence gathering is central to the success of any war and commended the support and cooperation of state governments in the area of operation.

“We are very excited with Kaduna, Katsina and Zamfara governments, we are getting cooperation from them, they are passing relevant information which we are crosschecking to ensure it is credible and useful.”

Abubakar assured Nigerians that the operation would be sustained.

“Just like we have been fighting in the North East, we will ensure the North West and North Central region of the country is secured.”

He expressed joy at seeing young officers in their 20s and early 30s conducting the combat missions in all aircraft types including the C130.

“In the past, only Brigadier Generals equivalents do fly it,
today we have Flight Lieutenants, Captains equivalent flying the C130.

“All this is about capacity building, once the capacity is there and the opportunity is given to young officers to train and acquire the required skills, the sky will be the limit, they can do anything, and that is exactly what these young people have been doing in the last few years,” the CAS said.