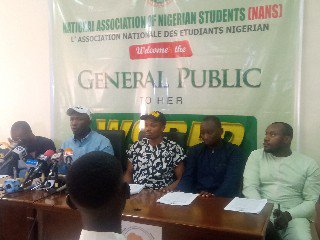 The newly elected President of the National Association of Nigerian Students (NANS),Mr Sunday Asefon has promised to consultant with the Federal Government and the Academic Staff Union of Universities (ASUU) for amicable resolution to ensure students return to classroom.

Asefon, who was speaking at a news conference in Abuja on Monday, said that the consultation would yield a positive result.

He also said that the newly elected leadership of the association would not relent on its oars but monitor government agencies in charge of scholarship of students.

He said that monies for scholarship of overseas students were adequately monitored and we’ll utilised for the purpose for which it was meant.

” I assure Nigerian students of my resolve to do all within my abilities to protect our interests, place the interest and welfare of Nigerian students above all considerations and reposition our association to take its rightful place in the centre of our nation’s polity.

” To this end, I will immediately set out to engage stakeholders within the education sector to add our strong voice against the overstayed ASUU strike.

” I will be consulting with the representative of the Federal Government and ASUU with the aim of prevailing on them to find a centre point for amicable resolution to ensure we return to school.”

He added that the consultation would avoid unnecessary mobilisation of students to mount protest saying that the association would not be complicit to such unending strike.

On the EndSARS protest, Asefon said that while the student body condemned police brutality on the youths the association would not be part of any protest that do not have leadership.

He, therefore, advised youths to select five persons from each of the 36 states of federation including the Federal Capital Territory (FCT) and meet to present their proposal to the Federal Government on their grievances relating to police brutality.

” Nigerian students have been victims of police brutality and we condemn their act.

” At the same time, we the students body cannot be part of any protest that do not have leadership structure.

” The protest will not solve the issue of EndSARS, the Inspector-General of Police has cancelled SARS and ithink those protesting should come together and present their common proposal on the issue the the right channel,” he said.