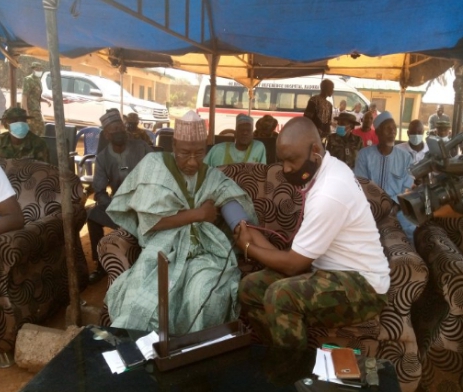 In an effort to enhance civil-military relations, the 44 Army Reference Hospital has organised a prevalent disease awareness campaign on the dangers of high blood pressure in some Kaduna communities.

Declaring the campaign open, on Saturday, the acting Chief Medical Director (CMD) of the hospital, Col Augustine Omogbethai, said the campaign was aimed at minimising the recent surge in high blood pressure cases amongst the people.

According to him, between two and three million  people were expected to benefit from the gesture, which would be incorporated into a medical outreach programme.

He explained that the areas expected to benefit from the campaign include, Kurmin Mashi, Anguwan Sanusi, Kakuri, Makera amongst other communities, in the State.

The News Agency of Nigeria (NAN) reports that the campaign kicked off in Badiko community, a Kaduna suburb, on Saturday.

Omogbethai disclosed that the outreach, which had the approval of the Chief of Army Staff, would be expected to reach up to 80 percent of Kaduna communities.

“Every weekend the campaign and the outreach is going to take place in an important community in the state,” he added.

He also said that the outreach was aimed at building confidence and trust, among the civil populace, with a view to facing criminal elements, who posed threats to the peace and stability of the country.

Omogbethai described hypertension as a killer disease, explaining that the hospital conceived of the idea because of the recent surge in the cases of hypertension in the country.

He pointed out that at the end of the outreach, the rate of hypertension and stroke would be significantly reduced,  adding that people would be well equipped on what they needed to know about the killer disease.

In a remark, Ward Head of Badiko community, Alhaji Usman Sani, commended the management of the military hospital for the gesture, while urging the people of the area to take advantage of the campaign by trooping out en masse to attend the outreach. (NAN)