5-Stars Football Academy to open in Abuja, Lagos and Ogun 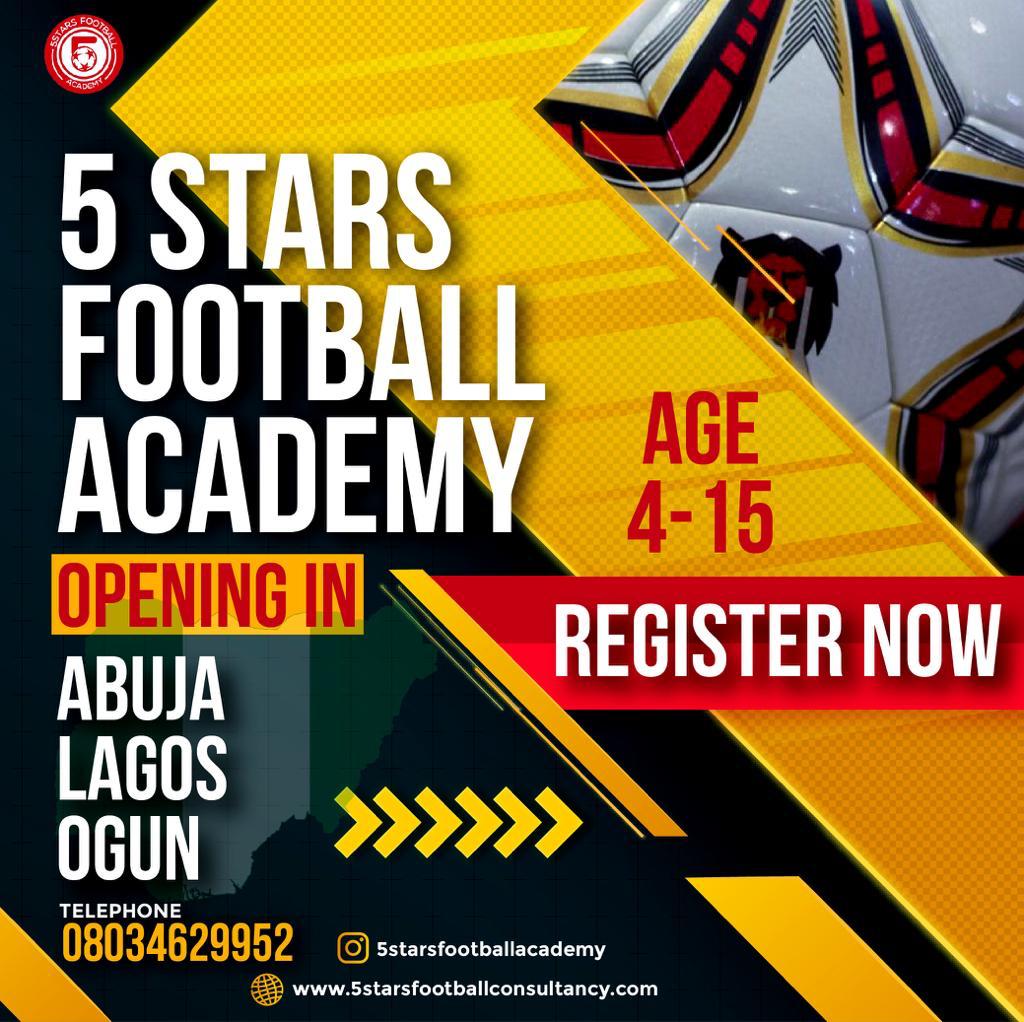 The 5-Stars Football Academy, has concluded arrangements to open in Abuja, Lagos and Ogun State within the ages of 5-15 for young talents and less privileged kids for sports development in the country.

Mr Olumide Aturu, the founder of the academy who disclosed this in a statement issued in Abuja, said the Kids to School Foundation is an initiative powered by Mr. Korede Dawodu and Ayoola Dawodu.

According to him, it is aimed at aiding talented footballers who don’t have funds to pay for the academy registration but have special abilities to be admitted into the academy.

The statement said that, “Nigeria possesses the potential to be a world beater in football but there are economic and infrastructural deficiencies mitigating its development.

“Lack of infrastructure and basic training have played a major role in Nigerian talents not being able to compete at the very top with their European and South American counterparts.

“It is in this light the 5Stars football academy in partnership with Kiek Foundation are coming on board to bridge that widening gap, saddled with the mandate to create a citadel for harnessing football talents, children aged between 4-15 years are the target audience with the aim of developing not just their talent but their minds.

“The Europeans and South Americans are exposed to basic training and rules of the game at a very young age whereas here in Nigeria kids are coached by either novices or amateurs who don’t possess the basic coaching training or license.

“Some of these academy coaches are mostly driven by monetary gains rather than developing the abilities of these kids. In some cases these children are levied monthly fees without getting it’s value and the knock on effect sees these kids bouncing off different academies due to financial challenges as many academies don’t have a scholarship package.

However he added that, the Academy which is a brainchild of the 5Stars Football and Consultancy Company also in partnership with the Kids to School Foundation will be having showcases across the country to unearth the best players.

He said It is was more worrisome that the Nigerian Professional Football League Clubs who ought to be in the best position to have an academy and the benefits that come with it, can not boast of a proper pathway for kids.

The founder further maintained that lack of proper player data among the academies with regards to the actual ages of the children also affect their development in terms of performance on sports.

“Children meant for a certain age category are denied opportunities to play in their rightful age grade as their places are taken over by older players and some of these older players never get older than eighteen (18) even five (5) years after.

“And most importantly, the lack of basic training kits and techniques for kids who should get accustomed to them at a certain age is also a factor. Some of our players tend to get culture shock when certain training techniques are introduced to them because they were never taught those things as kids,” the statement said.

However, he added that it has become apparent that Nigeria needs to take academy football development very seriously in order to stay in touch with a rapidly changing world. (NAN)